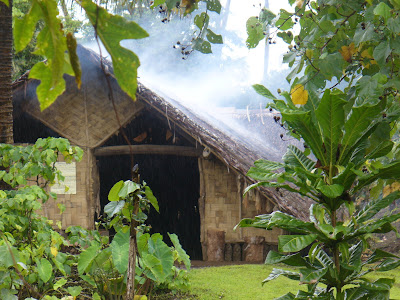 I've returned from three weeks in Vanuatu with a swag of notes and a journal swollen with stories. My week in a remote village on Pentecost was quite amazing.


I'll post a few and write up the rest for my "one day I'll publish a book of travel stories". Some of the early ones are a bit graphic. I hope you enjoy them.

The dismembered carcass of a bullock lies at one end of the Nakamal, its eyes staring at me from its head lying alongside a bloody pile of flesh.

Three fires burn at that end of the meeting house. A small one burns 24 hours a day and has spiritual significance. I am told it is the same fire that burns in the national council of chief’s Nakamal in the capital Port Vila on the island of Efete. We are on Pentecost Island.

The other two much larger fires occupy the far end of the 30 metre long building. One is a pit fire in which the bullock will be cooked wrapped in banana leaves on hot rocks. The other is a smaller fire used to heat giant iron pots of hot water, of rice, of kilos of taro, enough to feed the fifty attending the five day gathering in this remote highland village.

Seen from the outside the smoke and steam rising through the thatched roof creates an ethereal feeling in an environment infused with magic and the forces of nature. Above us, storm clouds swirl across the rainforest slowing the passage of daylight and time.

A group of young men, shirtless and wielding large machetes, work to one side carving and preparing the sides of beef hanging from the bamboo beams.

It’s like any butchery in any culture except the offal lies in a pile on the dirt floor and there is no refrigeration. I recall the sawdust strewn floor of butchers’ shops of my childhood and am comforted by the similarity; and yet I am somewhat disconcerted, a little confronted. 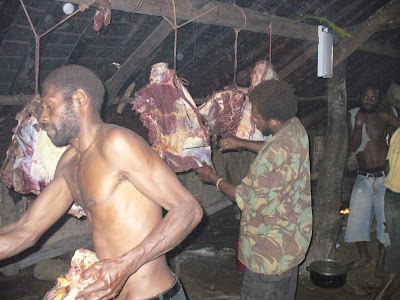 As a meat eater I know perfectly well that the meat on my plate has been slaughtered for my consumption. I know that the best meat is slaughtered in abattoirs where animals suffer minimal distress. I know that the best meat is fresh and, a day previously, will have been wandering a paddock or standing mutely in a holding yard awaiting its fate. I know all this but have never been quite close enough to witness the process.

My father was brought up on a farm and worked in a small goods factory as a young man. He had seen animals slaughtered, had begun his working life on the factory floor in the killing room. For him this was life. I too worked in the boning room of the local bacon factory as one of my stints of student employment. This was one step removed from the slaughter yard but as a young 18 year old the scene of lines of men carving and preparing the sides of beef was mesmerising, not to mention the loud and cheeky banter between the lads and the young women. The atmosphere was charged with energy.

My father had no hesitation in helping, what had become, the pet duck to the chopping block in the backyard. This waddling feathered friend had shared our sixteen perch block for a month or more leading up to Christmas unaware of its fate. We fed it bread and water and scraps and became quite comfortable with its company. But when the time came, I remember the sight of the headless body careering around the yard after my father's swift and accurate blow with his axe, as comic rather than tragic. I can still smell the rich musky odour of the feathers plucked soon after, having been scalded in my mother's large copper full of 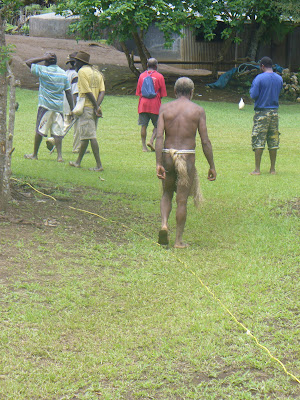 boiling water. The copper was a family essential, one day scalding a duck, another boiling a sugar bag full of crabs and then another boiling the white coats my father wore as a small goods salesman; heavily soiled from lumping sides of beef and pork into local butcher shops on his daily round.

This afternoon I had become distracted from our workshop program in Ataftabunga by a parade of young men, like my father (even of his then age), crossing the open village green-space, each carrying a hind leg or a side of beef towards the thatched roofed Nakamal. The last of these carried the head, horns circling his own head like a pair of reindeer antlers.

I'm here for seven days as part of a community development project. I am one of the two westerners who are accompanying the team of thirteen Ni-Vanuatu facilitators who will deliver a training program. My colleague Paul and I are here as the back-up team. We'll help when asked.
Posted by little hat at 16:58

When we kept chooks I thought my city dwelling nieces and nephews would love going to the hen house to pick out a fresh egg for breakfast - instead they were horrified to discover that eggs came from hens 'bottoms' - I think too many of us have become too far removed from from the food chain.

I am so looking forward to more of your tales from this fascinating place!

It is just the best way to eat meat.

You are BACK!
Yay
Hello