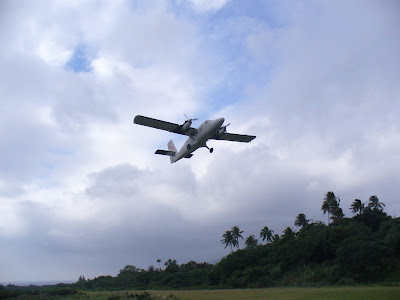 Yesterday we flew from Port Vila on the island of Efete to Sara on North Pentecost. The Twin engined Hawker de Havilland (Twin Otter) roared and strained as it took to the skies and headed towards our destination.

Like my carnivore life, I am out of touch with the up close and personal aspect of flying. I've been seduced into a false sense of complacency by many trips on large interstate and international carriers alongside hundreds of fellow passengers with faith in the gods of engineering and electronics. In these sardine cans I relax and listen to my iPod or watch the films on offer while sipping wine and eating altitude food. I'm only ever a little disconcerted on these flights; mainly when I turn my mobile phone off and wonder how such a simple device could be the cause of my demise. What if someone on board accidently overlooks this apparently serious request? What if someone accidently dials home as they toss and turn in their allotted one square metre of cabin space (dreaming of falling). Why haven't the stewards frisked each of us for these devices? why haven't we been required to stow these lethal weapons in our check-in luggage? why haven't these killers been confiscated?

On board the Twin Otter I have the dubious pleasure of sitting in the front seat. I am seated behind the two pilots who have left the door to their cabin wide open (or perhaps there is no door). I would like to be reading my book (I'm reading 'Atlantic' by Simon Winchester and here we are only a few thousand metres above the much bigger Pacific) but I'm transfixed by the scene before me. A dozen dials offer themselves and I have no idea what any of them tell me. 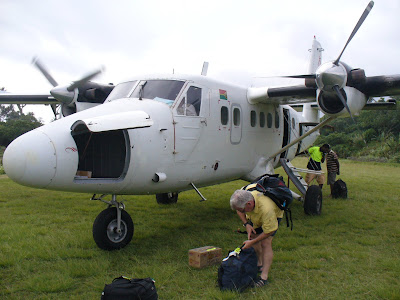 The younger of the two pilots keeps reaching above and behind him and making adjustments to various knobs and levers. He seems relaxed and after a takeoff, having reached an altitude of about 4500 feet (metres?) he pops open a packet of Twisties and settles in for the afternoon. About half an hour into the flight, with my eyes still glued to the altimeter (the only dial I have guessed the name of - only because it is the only one whose dial rotates and rotates clockwise as we rise) I notice the very dial begin to wind backwards. I have understood this to be a direct flight and my ticket tells me it is an hour plus trip.

The dial rotates back through 4000, 3500, 3000, 2500. 2000. I have a feeling of unease as we continue to lose altitude while still clearly over an unbroken expanse of water. Baby pilot seems unaware of this development and continues to stuff his face with bright orange Twisties. 1500, 1000. 900, 800. I can see the dark shapes of cruising sharks in the water just out of reach below.
I am tempted to reach out and tap him on the arm and point to the altimeter with a quizzical look on my face. Or I could just scream. But I look around at the 19 other passengers, all of whom show no signs of panic so I suppress mine in the interest of 'not looking silly'. I later wonder at the wisdom of 'not looking silly' in a critical situation. I would look even worse if we did ditch in the Pacific and I could have been the one to avert certain disaster. 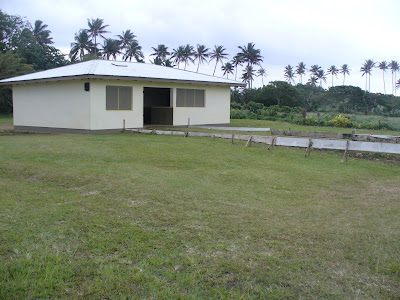 As it turns out we make an unexpected landing on Ambae. We're island hopping. What a relief. Ten minutes later we take off and turn sharply eastward and head over more open waters. I am less concerned by the altimeter this time and get back to reading about the Atlantic and the perils of flight over expanses of open ocean, but this is short lived. Before us, fifteen minutes later, what I presume is Pentecost looms below and we begin another descent; this time towards what appears to be an alarmingly short grassy runway.

The Twisties completed, our twin pilots wake up and, out of my sightlines, daddy pilot eases the steering wheel forward and back (is there another name? Joystick - sounds right but feels all wrong) and places the Twin Otter gently on the volcanic and coral runway and with the engines working even harder than on take off slows us before we run off the end of the green strip and into the fast approaching jungle and taxis us towards the terminal, a concrete building the size of the average footie change room. I love flying.
Posted by little hat at 15:42

I have only flown in one once - they weighed us all with our baggage before getting on. Very odd experience, at only 4ft 10in (and slimmish) I was lucky ... it has made me wonder ever since though - shouldn't I be entitled to a bigger baggage allowance? I weigh so much less than so and so?

I love flying too.

I flew from Toronto to Baltimore once. I know, that's not nearly as exotic or romantic as flying amongst islands in the South Pacific. However, I bring it up because it was a small plane - not quite as small as that one in the picture but the smallest plane I was ever in. Maybe sixteen seats.

People warned me about the noise, the bumpiness. Not a fan of heights (I can't drive over a high bridge), I ignored them. But that didn't matter. When I got in the sky, and with the relatively low altitudes flying over the gorgeous New York and Pennsylvania, I was plastered to the window the entire time.

Nose to the window, Steve.