Antiques - Me and my bike 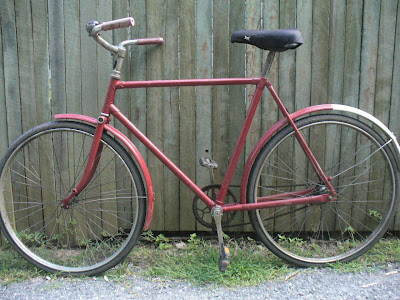 Oh my aching back. Is the pain worth the prestige?

I have a bike circa 1970. It's red and a little rusty. It has handlebars like the aptly named moustaches sported by English gentlemen in the era when bikes were invented. No gears, no handbrakes. Just me, two pedals and a bell. 'How do you stop' I'm often asked by curious young riders. They've never seen a single gear bike with hub brakes.

My father was a postman and somehow, I can't remember how, I bought this bike when he retired in 1981. I like to think it was his but it probably wasn't. I paid $5 for it. It was already old.

I've used it occasionally to go to the local shop for a litre of milk but generally my embarrassment at being seen in public on it has meant it's spent years languishing under the house, tyres flat and paintwork deteriorating. As further evidence of my uncoolness I don't own any lycra pants and my helmet has been an oversize yellow discard from my daughter in the early nineties. You get the picture. This is a story about humility and humiliation.

I am having a year off from work. My 'Senior's Gap Year' some of my friends call it. As an adult emerging towards maturity I have decided that I am resilient enough to brave the footpaths and local bikeways and 'come out'. It's a time to take risks.

I have a new second hand helmet, bequeathed to my by my son. I still don't wear lycra but times have changed. My bike and I are no longer old fashioned. We're now retro. In fact the latest trend in the bike world is a move to bikes with no gears or brakes - any brakes. Fixed wheel single gear bikes the same ones the professionals race in the Olympics. Its the new frontier, The bike that 'real' bike riders ride. They're banned from street use in the USA and some European countries. Makes them even more cool.

So I'm cruising along Russell Street past Musgrave Park and at the traffic lights these two blokes pull up alongside me. It's 10:30 on a Friday morning. I glance at their bikes and notice two things. First everything is silver, not the gaudy chrome silver but a soft burnished hue, and as my gaze tracks down the beautiful frame my eyes arrive at the back wheel. There I spy a single sprocket. No gears.

The lights change. We all pedal off. Slowly. No other option whan you have only one gear. 'Hey' I call out as they begin to outstrip me. 'Same bike' I yell, One of them turns and looks at me confused as to why I'd be talking to him, 'Twins' I say pointing to his bike and mine. He slows his rotation and eases back to have a look. 'Josh' he calls to his mate 'that's a posties bike.' He's impressed by the PMG sticker gracing the frame. 'Is that original?' he wants to know. I'm feeling pretty chuffed by this exchange. I tell him a 30 metre, ten wheel revolutions version of my story. 'Those bikes go for good money on EBay.' he says. I'm riding a valuable antique. 'I won't be selling it'' I say wondering exactly how much it might be worth.'

'Why do you ride those?' 'Makes you work harder. Don't like the lycra scene' he says. I laugh conspiratorially, proudly. Me in my daggy blue bermuda length shorts and home brand t-shirt. 'We call them mammals' I hear him say. Middle Aged Men in Lycra. Oh MAMIL I get it. 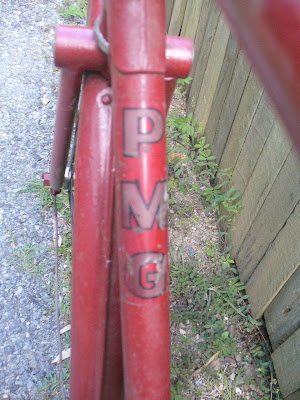 They go left and I go right at the next corner. I am riding high in my saddle, hiding my aching lower back caused by a serious case of over exertion on too many hills in the last few days. I must find the flat routes around my suburb. 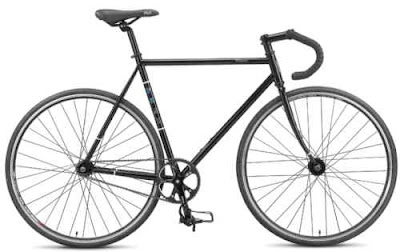 I ran a tearoom for a number of years in the heart of rural Surrey - as a result I have an aversion to MAMILS.

I'll be looking out for a photograph of you actually riding it ... at the moment we only have your word for it!

Near my condo building, at the end of the off-ramp from the highway, there is a similar looking bike, painted entirely in white and chained to a lamp post. It's a 'ghost bike' tribute to a cyclist who was killed by a streetcar near that spot several months ago. I expect there are others around the city. I wonder if it's more valuable than I thought. No one's ever disturbed it though.

Vintage bikes are quite fashionable here, and not only in the anti-MAMIL set. You'd look quite at home in Toronto Steve. Well, the bermuda shorts might look funny this time of year...

As a person who never learned the art of riding any bike, I'm full of admiration! I had to come by after reading your comment on my blog with its lovely typo 'I'm a French crepe ma! LOL (I only make thin and crispy pancakes too, thoug neither adjective applies to me personally! LOL)

Mamil! I'll be using that one in future HA!

Think of how strong you'll be riding up all those hills with no gears. I'm in awe. I'll see you round the bike tracks! (I'll be the one in the lowest gear)