When NORMAL can be Superficial 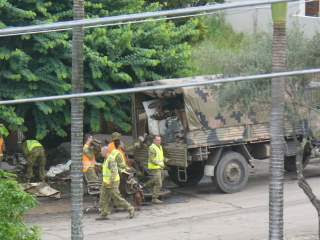 All is returning to normal in this flood ravaged part of the world. The worst affected in this city are those in apartment blocks where the body corporates have to agree on how to manage the damage bill. Often this is most critical in new apartment blocks which have very small sinking funds and perhaps only 4 out of 40 apartments (on the ground floor) affected. While the managers and Body Corporates struggle with assessing the damage and seeking advice about legal responsibilities tenants live without lifts and in some cases unable to re-enter their premises until the repairs are complete. This may take months.

At least those in stand-alone houses can get on with their lives, however shattered.

Sadly the uphoria of positive community energy has begun to fray at the edges a little with politicians using the flood rescue proposals as a political football - god I hate Tony Abbott and his whinging moaning one dimensional negative attitude. I too have begun to fray at the edges as I can no longer tolerate small mindedness. Others are whinging about who gets assistance and who doesn't; still others bleat about being asked to pay $1.00 or $2.00 a week for 12 months to rebuild infrastructure.

Some are claiming the benefits of the government handout ($1000 per person) when the only impact was loss of power and maybe a fridge full of food AND as a result will be exempt from the Government $1.00/week levy. Good outcome if your conscience can wear it. Others still are claiming the $1000 and donating it back to local flood disaster funds.

If you're interested in how communities survive disasters there is a great two page summary which talks about the phases of the recovery process. We have just entered stage two with more to come.

Go to http://www.globalfacilitators.org/VirtLib/Resilience/Dr_Gordon_Summary_DisasterSocial%20ProcessTheory.pdf
Posted by little hat at 13:36

It helps me to put life into perspective when I see what others carry. And it deeply saddens me. I can't even begin to imagine the loss.

It has been an interesting process hasn't it? I know people who haven't claimed who could have because they thought others needed it more which is lovely. I know others who've lost their house but can't claim because they're deemed to have assets i.e. tools for their business...it's all a bit mad. I have learned that my desire to volunteer perhaps exceeds my usefulness or capacity to volunteer. As I said it's all been very interesting.

Disasters the world over bring out the best and then the worst in people ... especially politicans!

I abhor small-mindedness too - and more so the older I get. What REALLY irks me, and is a common theme with me, is how politicians appeal to the smallest minded of us, and to the small portions of the minds in all of us - because they know it is the easiest way for us to form an opinion (resulting in votes). That they appeal to our anger, our greed and fears (all requiring very little thought) is reprehensible.

But I ramble, and am taking away from your writing. What you are showing here is that people and communities struggle LONG after any kind of disaster is [perceived to be] gone. I'm mourning the loss of that positive community energy on your behalf - I'm sure you'd have an idea who I believe is responsible for that.

Hi Steve, yes, maintaing the energy is difficult over time. Reminds me of what happens when someone dies. Everyone rushes in to support the bereft (who is in shock and not feeling much except bewilderment) and then leaves. Weeks later, when grief really takes over, there is nobody there!

In the case of your inland sea, one hopes funds are made available to pay professionals to keep up the support through the months and maybe years of recovery.

Tony Abbott's penchant for grabbing every opportunity to undermine every Government inniative has only been topped once. Ian Sinclair, then (National Party) member for New England said when the first AIDS case was detected in Australia, "That wouldn't have happened under a coalition government!"