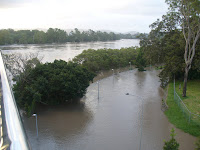 Mary watches her son and daughter-in-law carry her ancient belongings to the curbside. They are destined for the dump. As I walk by Mary catches my eye. She has retrieved a small battered wooden chair, the remnant of a child’s table and chair set. The chair has been repaired many times. Where there were once nails, mismatching screws now do the job; there is a piece of metal, cut in an odd shape, which holds the frame together like a cast on a broken leg. I see no value in it, nor does her son but Mary guiltily carries it back up the muddy path. That’s an age old game you're playing I say to her, The blokes throwing things out, the women saving things of sentimental value. It was made by my father she confides. Mary is 85 years of age. At least I think it was, she adds with a cheeky inflection. 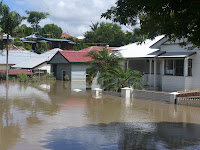 The morning after the flood-peak the local streets have a ghostly air. It’s like we’re in the eye of a cyclone, waiting for the next onslaught. I walk the deserted streets. The locals have fled. The water is up to the roofline in some low lying streets. The river has found it’s victims and is not yet willing to give up its hostages. On a ridge, only two or three houses above the flood line, a lone figure calmly mows his front lawn. At this moment normal life seems absurd. 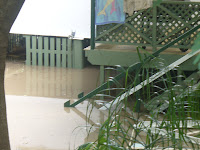 Without power and all the familiar landmarks I feel disoriented. As I crest Highgate Hill where Dornoch Terrace reveals the valley below I am shocked to find a void. Where my suburb should be sparkling with lights I see only black. The black is fringed by the distant lights of Indooroopilly to the west and Paddington to the north. It feels like I am descending into an enormous pool of sump oil, still and deep. My headlights cut through the night and guide me down the hill towards Hill End. My family and I are alone on this unfamiliar planet.

Armed with a torch and a candle we find our way through our strange house which has been spared. With relief we find our familiar beds and crawl under the covers calling to each other to check that we are all really here. Then it’s just the frogs.

The evenings in Hill End take on a new quality for these few days. No vehicles traverse the streets, no doof doof music pumps from the neighbourhood cars, no voices, no TV sounds wafting from neighbours houses. Not even the sounds of distant trains. Tonight the sunset seems particularly intense, a glass of sauv blanc tastes crisper than before the flood, there is an eagle we’ve never been aware of hunting from the tip of the high rise on the river; the lorikeets are louder; the flying foxes float silently along the chocolate coloured St Lucia reach, the house creaks. Tonight the candles are not adornment.

Andrea and I agree that there are some benefits to this imposed simplicity. Our children are not convinced. 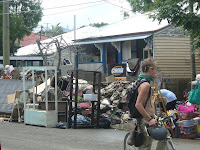 Sophie, Margaret, Beat, Denise, Cheryl, Michael, Helen, John and John. The streets of Hill End are strangely alive. I have met neighbours I never knew existed; I have spoken to neighbours I knew existed but had never met. I have seen inside the houses of millionaires - the riverfront mansions of architects, investment bankers and doctors. On the opposite side of the road, in the workerscottages in the gully I see the lives of the less well off piled high on the footpath. I have worked alongside strangers; I have walked alongside volunteers from as far away as Byron Bay, the Sunshine Coast, Los Angeles.

We have all been treated with an equal disregard by nature. The river does not discriminate. 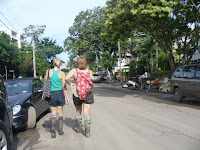 I feel every word you have written here Steve .. we've lived the same life the past few weeks. My inlaws reside in Yeronga & their house was swallowed the the Brisbane River as well. I experienced all you have spoken of & the emotions of the weeks have left my head in a spin. The humility, compassion, comradeship, the selflessness, the empathy, the devastation & the deep, deep heartache. It is most definitely a week that will stay forever etched in my mind for a multitude of reasons.
It has been a humbling experience to see people from all walks of life band together, work together & help one another. Queensland may have been dealt a vicious blow by mother nature but goodness in human nature is definitely alive & strong here in Queensland.

An interesting insight to your current situation - natural disasters are always humbling and as you say the elements don't discriminate.

Okay I said this to another blogger in a completely different context (albiet also devastating) - that THESE are the kinds of stories that help us to understand. To listen to the news on our end, to hear of flooding and devastating covering areas as large as countries - it's difficult to even think about.

But to know the people through these "snapshots" is to know the real story - to experience it with them.

Wow what a powerful post, Steve. So familiar. You've captured it beautifully.

And we may well have been standing opposite eachother across the lake on Gray Road!