This is my mother. The photo was taken in the thirties when she and her girlfriends were "enjoying the war" as young singles in Sydney. It's not as old as Tess's Magpie photo but it does have a double significance this week. Last weekend (15 January) was the tenth anniversary of her passing. We were to gather as a family to mark the day but the floods in Brisbane intervened. 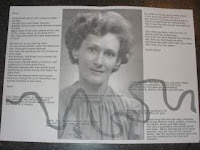 Ironically the image we had used as a metaphor for her life on her funeral card was that of the Brisbane River flowing ever onward. And now here we are, under water.

On the back of the funeral card we had included the recipe for her famed 'Boiled Fruit Cake".

Many have tried and many have failed to reproduce the moist rich flavour which she was able to produce every time. We always suspected that as her parting joke she had surely left out a secret ingredient from the recipe. So, as my tribute to my mother I have, this evening, attempted for the first time, to follow in her boiled fruit cake footsteps. To compensate for the missing secret ingredient I have added, perhaps recklessly, my own additions - which I will share with you not knowing if they will enhance or destroy the masterpiece. 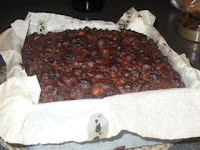 I have dropped in a few pieces of quality dark chocolate; tossed in a handful of blanched almonds and added a half a cupful of almond meal with the flour. Oh, and a dash of rum early in the process - with a whiskey chaser on the side for the cook (irish whiskey of course). The test, as they say, will be in the tasting. The other device she used to fool us was her handwriting which i will leave you to decipher. (I can post a typed recipe if you're interested) 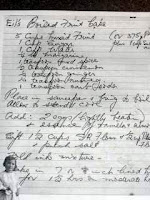 To my mother (written 10 years ago - my mother was a big talker, hence the last line.)

In the photo album with triangular paper corners
You and Clare and Eileen Connolly
Dressed in your hand-stitched pinafores of crepe,
Sepia toned in the rusty colours of the thirties
Off to another dance at the Hyde Park Y
Your faces alive with the fresh expectations of youth.

Sixty years on, in your parting hours
You lay, almost daintily under the bedcovers
Your young girl's frame returned
Your eyes still sparkling with the innocence of an angel
And smilingly, peacefully, you accepted life moment by moment
Generously offering tidbits of memory and sustenance to those around you
Filling the silences with your gentle touch
Reminding us of who we are and where we've come from.

There will be silences when you're gone
More than enough for us to remember you by.

For more writing by writers from across the globe go to Magpie Tales or click on the stamp.

Lovely, lovely post. I know your mother is smiling. Your rendition of her cake looks wonderful. I'm sure it's because of the Irish whiskey chaser!

Aww..I loved this, what a gorgeous post.
I loved the last few lines, that silence is very hard to fill.
Hope you are surviving in the floods, check out '100 stories for Queensland' blog if you want to contribute a story for a charity anthology.

Lovely tribute to your dear mother. I'm sure she is smiling down on you and family, prefering you be safe and hold her in thoughts.

How tantalising that you didn't add your own translation of that rather blurry writing!

mother's love is unconditional.
she must be proud of you.
Cheers.
Happy Tuesday.

Really lovely post, Steve. I am moved that you made her cake to mark this time.

I had an Aunt Martha who was a huge part of our lives. She was more like a grandmother to us than our grandmother was. She died several years ago when I was abroad, in Wales, and I was devastated.

Aunt Martha had a "famed" fruitcake too. Thanks for giving me cause to think of her as you remember your mother in such a beautiful way.

(Aunt Martha would appreciate the whiskey chaser for the cook, too. Hers would have been a gin martini. Cheers!)

I loved this tender tribute, the young girl frame returned was so telling.
Lovely.

So beautiful. Thank-you for sharing.

A lovely tribute to your mother all round.
The tale explaining the picture, her (almost) recipe and your sweet poem in her memory.

A tribute from the heart. Absolutely lovely.

Everything about this is so deeply personal and evocative..I hope she really did the parting joke..and had the last laugh!! I'll just try the shot, thank you..

Oh, my goodness. This made me cry. Not the fruitcake that you made. You can guess which part.
My mother died in 2007 and I'm not over it yet. I wonder sometimes if I'll ever be over it, and, according to my friends, I won't.
I love your title 'Watermark' - so very, very apt.
-- K

That is just lovely. Today is one month since my own sweet mother passed away. I found her recipe box. She could not cook to save herself but she could bake like no one's business. I really loved your Magpie. I wish you well and hope that you haven't suffered too much with the flooding. Peace to you and yours.

Enjoyed hearing about your Mama.

Your poem brought tears to my eyes ... yes, our mother's bodies return to their girl-like proportions at some point.

Heartfelt post of tribute, your mother was a beautiful lady and obviously made a real mark on your heart and those around her...you are very fortunate to have had her....blessings....bkm

Gorgeous post, Steve. My Mum is eighty and hasn't given me her steamed Christmas pudding recipe...yet. It's really her grandmother's recipe and I'm the only daughter so I live in hope that one day the knowledge will be passed on.

Gosh so much in one post...
Lovely photo and poem.
I hope things are ok with you and your family with all the flooding I read about.

And the pudding?
It looks suspiciously like my Grandmothers Carrot Pudding

This brought a lump to my throat. My mum also made a mean Boiled Fruit Cake, with her own additions of glace cherries, apricots, dessicated coconut and chopped walnuts. She called it her 'royal' fruit cake. Try turning it upside down when it's cooled and piercing it with a skewer and drizzling whiskey into it. Yum yum.

absolutely beautiful. What a testimony to your mother, in each and every way. LOVELY!

Lovely tribute to a mother and a REAL cook!
Also read through your recording of your Hill End flood stories, with a lump in my throat. Seems we connect with our neighbours when our world shrinks!