George
George - son of a General was born in 1997 on the outskirts of Adelaide South Australia but spent most of his life in Queensland. George, who was a sibling to countless ex machina brothers and sisters, was particularly loved by his foster parents Pauline and Denis and loved and respeceted by his half brother Danny and his extended family.
George's family of origin had a proud history of achievements spanning over 50 years. Notable highlights included his family's triumphs at Mt Panorama and the impact on the world of his younger 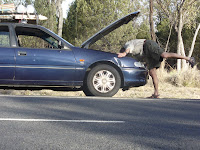 brother Ute and his flashy cousin Monaro.
George travelled widely, rarely independently, preferring the company of his foster family. He loved fishing trips, island holidays and camping. It was on one of these camping trips where he met his untimely end.

He had had major surgery two years previously and though it appeared he had fully recovered, he had an unexpected relapse outside Injune on the 27th September 2009.
He was aged 12, though his body showed signs of premature ageing and even tell tale signs of neglect - though family members refuse to discuss this (out of a sense of protecting his half brother Dan it is rumoured). Some felt that he had not been in the best of health. Their warnings sadly were not heeded and George himself insisted on accompanying Denis and his three mates on this much anticipated trip.

George died beside the Carnarvon Highway 15 km north of Injune of massive internal hemmoraging. Valiant ttempts to revive him failed and he was pronounced dead by RACQ Luke at 8am on Monday 28 September.
In a moving ceremony George was stripped of all his valuable assets (including a brand new roof rack which some in the family feel may have contributed to his demise) and laid to rest by Denis and his three travelling companions.
George now rests in peace at the Roma Automotive Service Centre.
"Kings would call his name in honour of his clan" Shakespeare's The Tempestuous 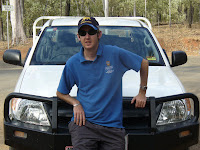 An hour after his sad burial George was replaced by this little Toyota Hilux twin cab beauty who was much more adapted to the harsh life of the west. (not meaning to imply that George was a wuss) 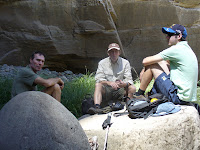 The sad relatives hold a wake at an aptly named Carnarvon Gorge site -'Big Bend"
Posted by little hat at 20:58

Poor George is dead
Poor George Car is dead
All gather round his coffin now and cry
He had a heart of gold
And he wasn't very old
Oh why did such a feller have to die?

Poetry. Such lyricism. My tears wash the keyboard on which my memories of George were composed.
Noah would have taken two in his flood. I too have been taken by a flood of grief.
Oh 'tis too brutal a world for a car like George.