Steve Earl and a few Haiku

I was listening to Steve Earl (musician) on the radio today and he was talking abouit how he keeps the many sides of his creative life alive. One of the stories he told was how for a year he wrote a haiku every day. He said it helped him be focused at least once a day in the midst of the chaos of life. I liked the idea of that simple discipline. But I'm not going to commit myself at this stage. I pride myself on being a sceptic when it comes to fads and following, pavlov dog-like, others ideas. Having said that I thought I'd delve into my short collection of Haiku and share a couple.
I read that haiku is much more than the 5-7-5 syllable structure we learnt at school and can take many forms, but I'm still drawn to that simple discipline of 5-7-5 and the challenge of finding the best set of sounds to capture something fleeting or profound. Steve Earle also insists that he follows the Japanese tradition that every haiku refer to a season somewhere in each poem. I don't know that mine do.
My favourite was one I wrote for my good friend Pauline Peel when she resigned from her job in the Brisbane City Council (BCC) where she had reached the dizzy heights after beginning life on a dairy farm 150 kms outside Brisbane.

Warwick maid shuns cows.
Wends her way to B C C
Cream rises to the top.

At our house we have a biennial Lime Festival where Lime is king for a night and all things lime prevail. At the last festival we had a Laiku competition. These were my offerings: 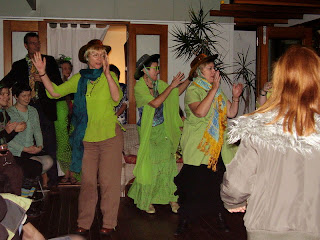 Citrus fruit, one bite
Sends shivers up my spine
Shudders of delight

There's a story on this blog about the lime festival - see October 14 "Carmen Miranda meets the Tea Cosy".

And finally for something completely different - one for those opinionated radio talkback hosts.

Not a season in sight - though nature does feature strongly in all but the last.
Posted by little hat at 21:21