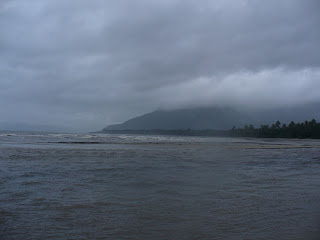 My friend Julian has sought to clarify my fictional account of his life. I said he didn't swim. That's not true (though it suited my storytelling purposes). He does indulge himself, particularly in exploring life below the surface. He dives and snorkles. He just doesn't like the idea of striking out for some distant cliff or cove for no apparent reason. I guess that's the difference between swimming and, well, not swimming.

He also pointed out at the full title of "The Swimmer as Hero" is "Haunts of the Black Masseur. The Swimmer as Hero." The first part of the title adds an added level of mystery to this eccentric account of swimming through history. I'm still grappling with it and would be interested in other's thoughts. There is a dark and obsessive side to the accounts in this book - at one level painting water as a siren-like element luring its devotees to their watery graves; at another endowing it with rather powerful erotic overtones and in some cases sado-masochistic. Deep, black, mysterious, powerful - the ultimate seducer. Hmmmmmm.

I found another book on this theme at Avid Reader today. Waterlog - the account of a mad swimmer who set out to swim across Great Britain via lakes , streams, rivers, puddles and any other repository of water. I'm hoping that someone might pick it up for me for xmas. I discovered it when I was investigating if anyone had written a book of stories or accounts about their swimming experiences. I'm thinking it could be fun to create such a collection. My mate Denis has expressed a vague interest in the idea. Would there be an audience? My next blog follows this story theme.
Posted by little hat at 21:22