War in the Balkans - My Take Part II


The Partisans are anti-facist and united by ideology rather than ethnicity and as a result attract both Croats and Serbs to their cause. In fact so successful and popular is the Partisan movement that it spreads across the length and breadth of Yugoslavia and by the end of WWII its composition has changed radically and is now 9% Croats and 70% Serb.They are a well drilled military force of 800,000.

To complicate matters further there had emerged a movement in Croatia which was composed of Croatian Serbs known as Chetniks, seeking to establish independent control over areas where Serbs are in the majority. They used similar tactics to the Ustace but in the opposite direction, targeting Croats and Bosnians within Croatia.

Still with me? Kristina talked to us for three hours explaining this. My apologies if it's a bit dense. Kristina gave us a couple of short breaks so feel free to make a cup of tea and come back (or not).

The war ends. The Germans leave and Tito and the Partisans (they deserve a capital "P"
by now) gain the upper hand. But remember, Tito was rather enamored of Stalin? Under his leadership the Partisans are just as ruthless as the Ustace. Tito initiates a policy of retaliation targeting members of the Ustace and any suspected collaborators. Up to 100,000 people are massacred, many being children and women fleeing towards Austria to seek safety in the hands of the Allied forces. 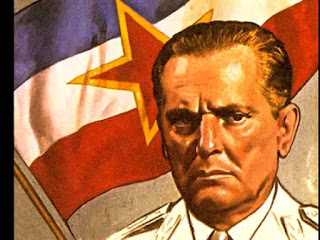 1945 - Marshall Tito (who is Croatian born) becomes the leader of the new Communist State of Yugoslavia. 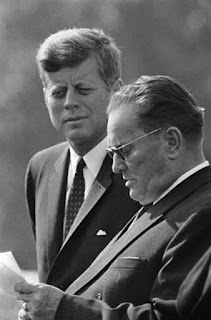 1948 - Stalin attempts to bring this new federation under his wing. Tito rebuffs him and chooses what becomes known as "Soft Communism". He is intent on maintaining unity across the traditional ethnic lines. Each state is allowed a certain degree of automony; ethnic groups are encouraged to move between states, intermarry etc in the hope of breeding an integrated Yugoslav community. Still, he suppresses all opposition ruthlessly while managing to forge alliances with both Western and Eastern bloc countries. He is a genius at diplomacy. He also charms his way into the every Yugoslav's heart. Though Croatian born he rules from Bucharest, the capital of the Serbian state. Over time Croatia, which is relatively wealthy and earns a lot of foreigh revenue, begins to feel a bit hard done by. They contribute a lot to the Yugoslav coffers but perceive that the major beneficiary is Serbia.

1980 - Tito dies with no clear succession plan. The Central Yugoslav Parliament elects to offer each of the Yugoslav State Presidents a rotating role as President. This is intended as a way of maintaining unity but backfires badly. It is unclear who is leading the country, rivalries emerge and the most dangerous of these is the Serbian politician Slobodan Milosevic. He is ambitious and aggressively pro Serbian and manages to take control of Serbia, becoming President in 1989 on a promise to "Make Serbia Great Again". He uses Kosovo as his lever. The population of Kosovo is about 75% Albanian. The Serb minority have aspirations to take control deeming the Kosovo territory to be historically Serbian. The Kosovo Serbs foment rallies and when Milosevic visits they stage a violent rally with the specific intent of provoking the Kosovo police. A street battle ensues. The Serbs complain of being beaten and Milosevic promises them: "You will never be beaten again".

He seeks permission from the Yugoslav central government to give him special powers to deal with the Kosovo situation. He encourages Serbs to rally in front of parliament in Belgrade. One million people attend chanting his name. He is their saviour. The parliament reluctantly agrees to his demands. It is based on a lie

1991 - Croatia and Slovenia have been observing these events with trepidation. Milosevic is on the rise. Serbian nationalism is rampant - inflammatory speeches are made by Milosevic, often misrepresenting the real situation, Croatian militia are accused of massacres of their Serbian/Croatian brothers and sisters; he reminds the Serbian public of the horrors of the Ustace era.
Posted by little hat at 18:14