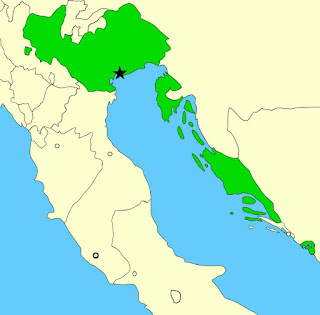 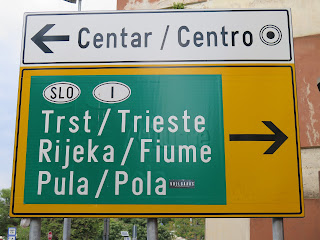 First I must make an apology to the Croatians, Montenegrins, and others living along the Dalmation coast who may have been affected by six hundred years of Venetian dominance.

To set the record straight I will remind you that in a previous post I suggested that the Venetians were more traders than raiders and therefore made less of a negative impact on the communities which they ruled. I have put this to a few locals and while the response has been mixed the general consensus has been that, yes, they were traders but they weren't without fault. neglecting infrastructure beyond what met their own maritime needs, and harvesting every resource available for their profit. In short their legacy was to leave the Dalmation Coast impoverished.

To this I would say, as a loyal descendant of a Venetian family: don't be too harsh; don't be too quick to judge. It was only 600 years after all, and everything occurs in some order. It was clearly next on their "to do" list.

The Venetians were indeed a maritime superpower. They traded the Mediterranean and dominated in terms of  naval and economic power. They brought Catholicism. Croatia is 98% Catholic. Interestingly neighbouring Slovenia, which is closer to the modern Italy and Venice, is today only 60% Roman Catholic. So they built churches. In some cases it seems that was an obsession. In the tiny centre of Perast in Montenagro they built twenty. One for every family? On the other hand they did bring with them a cuisine. Pasta, cured meats, sauces. Croatian traditional food is grilled meat, grilled vegetables and bread. Not much on the menu for the vegetarian I'm afraid.

The rich and powerful were out and about in the area for more than two thousand years. The Romans, the Ottoman Empire, Venetians, Austro-Hungarians. To an Australian that number is mind boggling.

Slovenia was under either Venitian or Austro-Hungarian (400 years) rule for 1000 years of that period. Luckily for them the Austrians valued Trieste as a port and were not much interested in the rest. The Triestians marvel that in all that time the Austrian royal family only visited once. It's not much fun being a minor state. Modern Slovenia has been left with just 43 kilometres of Adriatic coastline after Trieste was returned to Italian control in 1954. The poor Dalmatians, if it wasn't the Venetians or Austrians it was the Romans or the Ottomans making surfs of them.

But the Croatians have had the last laugh. For hundreds of years Italian, or to be more precise Venetian (remember there was no such state as Italy until the 1860s) was the lingua franca of the Dalmatian Coast particularly in Istria. Then along came Napoleon and vanquished the Venetians. Then the Austrians arrived for another 100 years, then WWI and the Italians again, then WWII and the formation of Yugoslavia and finally in 1991 Slavonia and Croatia became independent states. Croatian/Slavonian again became the official (well it had been since time immemorial actually) language, though Istria is officially bi-lingual (Italian and Croatian).

Italian is a strictly phonetic language with every letter sounded by way of pronunciation. So Trieste is pronounced tree-ess-tay (slightly differently in Venetian, which is still spoken in Veneto and Friulia Venezia Giulia - though different dialects in each region). The vowels are important and prounounced individually. So what have the Croatians done? They removed those precious vowels and left only the bare bones.

Take that you Venetians. You gave us vowels. We're throwing them back at you. We don't need them. They're a waste of space. Of course I exaggerate. Vowels are common in the Slavic languages its just that sometimes they disappear.

I can't fathom how that works but Andrea, who studied linguistics as part of her speech pathology training, says they sound the open vowel sounds within the consanent blends or something like that. But that's just a fascinating distraction.

In summary, the history of this region is replete with stories of invasion and ethnic rivalries. I'm beginning to get my head around recent events - the Balkan Wars etc but way too complex to summarise here. If you're interested there is a great BBC documentary on youtube titled "The Death of Yugoslavia."

It's raining here in Zagreb as I write this and the temperature has dropped from 30 to 18. How dare it do that on our last day. We board our flight home tomorrow (Friday) evening. Farewell to Montenegro, Croatia and Slovenia. It's been a fascinating four weeks.
Posted by little hat at 06:34