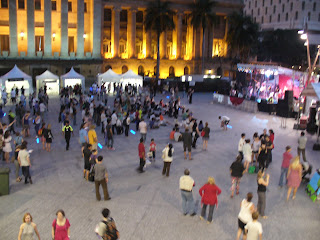 I was involved as Manager of a fabulous Youth Team serving young people throughout the first decade of this century. This was at the local government level.

The surviving youth resource centre from that era is celebrating its 10th anniversary this week. I can't be there but I wrote down a few snippets from that time. Memories that have stayed with me (among many others) 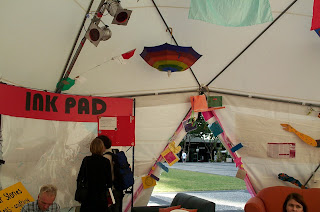 1. Tee-Pee. I recall the installation of a large Tee-Pee in the centre of King George Square (outside City Hall) as part of an early Visible Ink Festival. It was a hit. It had young people wandering in and out for a chat and musicians turning up unexpectedly for a jam including some backpackers. At night the street kids would gather and tentatively enter the space and settle in for a quiet "blissful" hour or so. Big old lounge chairs, a square of carpet, coffee - it was definitely alternative. Deanna Borland-Sentinella and Liz Capelin were among those who put it together and managed it, often late into the night. 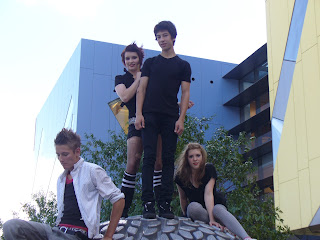 2. Bombshell. A drama filled afternoon when the "Youth Team" gathered in the large meeting room to receive the news that the team had been left off the organizational chart by the then manager. The Team was to be split across the city and mixed in with other community development teams. We'd all worked so hard to build a strong team with an innovative approach to our work that we couldn't understand why the organisation would want to dismantle something that was obviously working so well. Three weeks later we received a reprieve when the Branch Manager returned from leave and said "Why would we do that?" 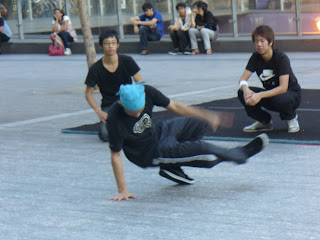 3. Grafitti panic. The LM had issued an edict that grafitti was not flavour of the month and while we had a policy of encouraging young people to work within the law we were unsure of where the line was drawn. I had had a meeting with the LM Policy Advisor and his interpretation of Grafitti was 'anything done with a spray can'. This was a bit odd as Council had commissioned a well known public artist to create some attractive water themed murals for their public pools. Unfortunately one of the photos of these murals in progress showed this artist with a spray can adding the final touches to the entrance mural. This was regarded as grafitti. There was a panic. The LM had been invited to officially open the new temporary Berwick Street space and a major interior wall had been used as an artists canvas for young people using spray cans. The ban on grafitti was aimed clearly at external 'public' walls and spaces so this was not breaking any rules. However we'weren't taking any chances of spoiling this great opportunity to meet the LM and show off what young people could do. The wall was quickly repainted with large squares of Grafitti Art left exposed as if intentionally framed. 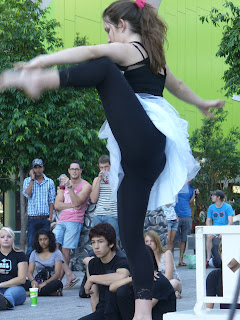 4. Discovery.The Vis Ink coordinator who began work at Constance Street and worked through the move to Berwick Street and is now back to Constance Street again. His job, at the time, was to look at sites that the Council had identified for a temporary home while the Constance Street site was being redeveloped. We were offered two options: A site in fairly good condition a few blocks east of Berwick Street about the same size as Constance Street; and a much larger site much closer to the centre of the Valley and in worse condition. The second one was twice the size of the first place but about the same rent. Decisions are never easy. Was it best to go with small and comfortable or large and scummy? Close to the action or further away? Was Berwick Street too close to the wild heart of the Valley? He and I considered this carefully for a day or two and then said lets be brave and take the risk. "Imagine what might emerge from this awesome (and scummy) warehouse space?" we said to each other. And the rest is history.

5. Comparisons. It's hard to remember the original Constance Street site except in its physical form.The programs and activities and initiatives which began there and exploded at Berwick Street and which have informed the new Green Square space were not even possible to imagine 10 years ago.

Moral of the story: It's only in taking a risk that new things happen. Visible Ink 10th anniversary
Posted by little hat at 14:46

I really love the Tee Pee scenario, it sounds lovely. Cheers for your recollections!