In my early work in community arts as part of Street Arts Community Theatre Company we ran some workshops at the East Brisbane State School (1983) as a part of a Community Circus Festival Project. There we encountered a young fella, Greg, who was a gifted but troubled boy. He was able to ride a unicycle within 10 minutes of getting his hands on that notoriously difficult monster and could juggle 3 balls proficiently in the same short time. I was amazed. Sadly his background indicated that he was headed for a troubled future.
Thirty years later Greg is still alive and earns his living performing his circus tricks throughout the world. He has two special talents - 1. He can swallow a metre long sword on command (no tricks) and 2. He has become obsessed with tattoos, officially becoming the 'most tattooed man on the planet'. He's gone from a young white boy to a green tinged … well see for yourself   http://en.wikipedia.org/wiki/Lucky_Diamond_Rich 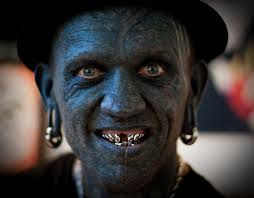 He has chosen a weird path but occasionally I have contact with him and he attributes his survival and career path to those circus workshops he did with us as a 12 year old.
He has even entered the mainstream. A portrait of him was one of the finalists in this years Archibald Portraiture prize.  http://www.abc.net.au/news/2012-03-19/leslie-rice-entry-in-the-2012-archibald-prize/3899412

Ironically Greg has become so completely tattooed that he has now begun to re-tattoo himself with white ink - gradually reappearing from the murky dark and reclaiming that young white boy I knew in the 1980s.

I was reminded of Greg today when I received an invitation to the 10 year anniversary celebration of Brisbane's Visible Ink Youth Space in the Valley; a place which thousands of young people have visited over the years to explore their creativity and seek a direction in life and in some cases been changed forever. I wondered if there was a Greg among them? 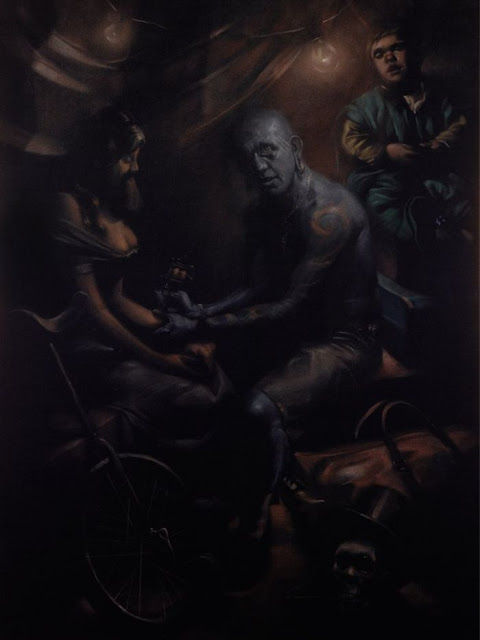 So its YOUR fault!

Nah. great story Steve. Thank goodness for the eccentrics of the world I say.

I am one of those people who find tattoos rather aggressive, excessive tattooing (in my opinion) is plain bonkers ... a man who boards my bus each day is also covered in them - all over his face and neck, every visible part of his body; he is also bonkers (in that he talks loudly to himself and shakes all the way).
The circus tricks I can admire though.