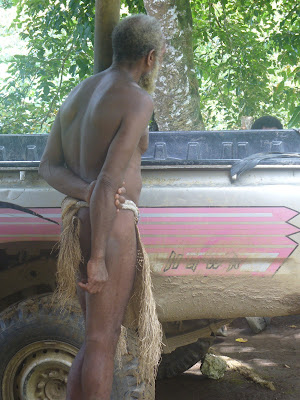 This Vanuatu story could go on for many more posts such was the fullness of the week. A funeral; a full on tribal dance finale including a Johnson's Baby Powder surprise ending; more taro on my plate than I could carry in a wheelbarrow; and some fascinating conversations - but I'm going to jump to the end and leave you to imagine the missing bits.

The week is full of bizarre contrasts. A delegate arrives wearing nothing but a woven lap lap. He attaches his name tag to the pandanus string circling his waist. No one takes any notice (except me).
My mobile phone runs out of credit. At morning tea we eat french crepes cooked on the open fire and filled with island cabbage and capsicum while a local chief takes my money and recharges my phone via his mobile. He is a 'Digicell' agent. Digicell is the local carrier.

One of my colleagues has, for some inexplicable reason, decided to do his presentation as a Powerpoint. We have spent the past three days in the training room in, at times, near darkness - there is no power, no power-point. He runs a cable the 100 odd metres from the village generator to his laptop. The power keeps cutting in and out. He has no Plan B. It works

In a village proud of its Kastom ways and commitment to Kastom language and Kastom names the chief's 11 year old son is named Zinadine - after the French captain of the succesful 1998 World Cup soccer team. Pentecost is not even a French speaking island.
The building we are sleeping in has a kitchen, bathroom, and flush toilet all plumbed in. Each morning at 5am, one of the young village girls spends half an hour carting in buckets of water from the water tank nearby to fill the large tub we use each day for bathing and flushing the toilet. The plumbing has never been connected nor a pump installed. We flush and wash bucket by bucket. I love it.

I fear I have become one of those tragic westerners who romanticises the simple life of the native. I have fallen in love with this place. I sit on the porch of our concrete accommodation block and gaze misty eyed at the village green - there a young girl in a dress in need of a wash throws a rock at a half inflated soccer ball in a contented game she has made up.

Chickens and chicks and roosters scuttle about pecking at unseen morsels; laughter reaches me from my ni-Vanuatu colleagues who sit and wave at the odd utility filled with locals passing by on its way up or down the one road. 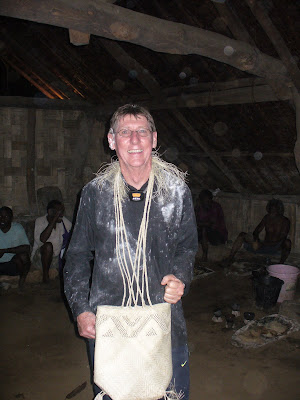 In the Nakamal men lie on benches, snoozing after lunch. They are dressed in the same shorts they have worn all week. Their chests glisten cocoa brown in the filtered light seeping through the woven walls.

Even the singing of Happy Birthday to our admin worker is suffused with island magic. The group sings the song in 10 part harmony, each person following their own melodic path. It becomes a sacred choral piece as they sing it slowly and with deeply felt meaning. I feel tears welling in the corners of my eyes. I join in with a joy I cannot fathom. I hate this song sung every year in such unattractive variations back home. Slow and rich and harmonic, it feels like a hymn.

Wonderful contrasts. I love all of them. At one of the fishing shacks we stay at, the toilet is much the same. It's a different life, being connected to the source.

So disappointed that you didn't appear in that final photograph wearing a woven lap lap.
I have had similiar experiences to yours whilst island hopping - it's been great fun reading your stories.

Marvellous contrasts. What a rich way to look at things. The birthday hymn - before I read that it caused tears in your eyes - caused tears in mine. Sometimes we really need another perspective on things.

(That sounded trite and over-simplifying of the thrust of your story. But it's simply true.)