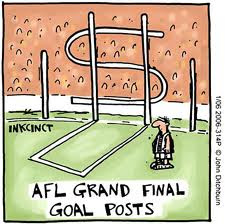 I am about to write about sport. This may not figure large in many of your lives but bear with me. I'm trying to both celebrate the end of the Australian Football League (AFL) season for my local team and to understand why I still keep going back. Does sport have a bigger meaning for me than merely a Saturday evening adrenalin rush?

This could be a thesis but I'll try to limit it to my whole life and not the history of sport on the planet.

Okay. I was once a young bloke who spent every waking hour (when not at school) running jumping kicking hitting bouncing rolling racing pedalling swimming diving and catching things. As a fourteen year old it was everything. Call them my innocent years.

As I got older I became aware of the world as an imperfect place. I learnt that men could be bastards, that money and capitalism were evil and, among many other things, that competition was at the core of many of these ills. I still enjoyed sport but it became a silent pleasure. A guilty pleasure. To love sport was not cool for the enlightened man. 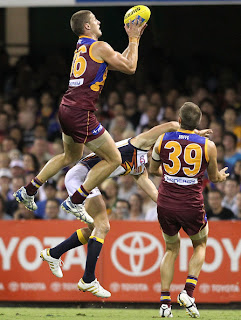 Then I had a son. A son who emerged from the womb carrying a tennis racket, cricket bat, a selection of balls, a compulsive need to be active and a drive to compete. And win.

I was amazed. This was not of my doing. This was either innate or learned from someone else. But i was powerless to stand in the way of this pint sized force. So I bowled balls to him until my arm ached; I kicked balls around parks until I knew every possible place a ball could get lost. I raced him in and out of the surf; I forced myself to play tennis - a game for which I have no talent. At first I was reluctant but finally I gave in. I saw that this was a deep need in him. I saw that my role was to manage his attitude to this competitive spirit and to celebrate his love of life and movement.

At some point 15 years ago I found myself a season ticket holder and a member of the Brisbane Lions AFL club. I had regained my love of sport and overcome my 60s guilt. Sport, with all its limitations (and there are many, particularly in professional sport) was again part of my life. So with my son (and my daughter) I have watched motor sport, The Tour de France, rugby league, rugby union, AFL, netball, volleyball, baseball, tennis, cricket, Summer Olympics and Winter. I have watched American Football, a game that completely baffles me. And I have watched the Mighty ducks movies more times than is healthy in one lifetime. I have seen some remarkable feats of courage and drive and moments of sublime humanity. I have also taken up sport. As often as I can I sail on the river, ski, swim, surf, bushwalk, climb mountains, ride my bike. Some of these are more of a hobby or an interlude than a sport. But I enjoy being physical.

I have even developed an analysis of organisational structures based on sport - along the lines of how different sports and their rules constrain play and set boundaries. From the hightly structured and heavily rule based (Rugby League or American Football), to the more open and 360 degree games such as Soccer (or football as the world beyond Australia knows it) and Basketball. I personally am in love with organisations who encourage creative opportunities where almost anything is possible within a minimal set of rules. Of course this works in some but not all circumstances. You can't run a jail system with minimal rules ( though some would say we could apply much more creativity to their operation - and for the better).

Anyway. My team came almost dead last this year in the national competition. Having won three premierships in a row in 2001, 02, 03 (the threepeat) we're going through a tough period of rebuilding as the old and bold retire to make way for the young and feckless.

These lean years contain other things sport can teach us: perseverence, loyalty, patience, that life goes in cycles. I intend to continue to indulge my love of things in life which allow people to strive for attainable and unattainable goals. I wonder, is Utopianism a sport? 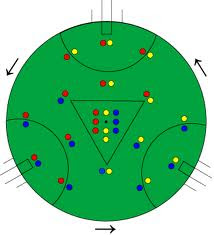 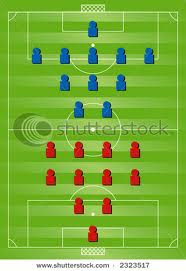 Steve, from this decidedly non-sportsy girl, this has to be one of the most beautiful essays you've written. For the record, I heard it in my mind read aloud, as if on public radio.

(Ps - I live in Toronto, home of the Maple Leafs. Quick Google will tell you that Maple Leaf fans know of the striving for unattainable goals.)

Thanks jennifer. I really appreciate your feedback. I'll go back and read it again now (with a glow). I thought it might be crap or simply of no interest as no on had commented.
The Maple Leafs - sounds like they would have the expectations of the nation on their backs having chosen that name. There are teams in the australian competition who have won one premiership in 100 years. Their fans are very patient, not to mention loyal and longsuffering.