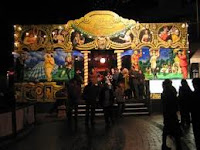 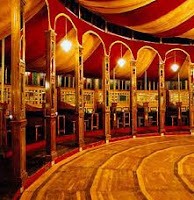 I was reading one of my favourite blogs, Realia, the other day and Jennifer was speaking about a special friend, Debbie, who was one of those people who make her feel totally comfortable. We all have them. Soul mates. Special friends. People who are there for us with us. They're not always friends from way back but they are the ones we cherish. Sometimes they are even our spouses.

A night out with 'my Debbie'.

Mary and I met in the late seventies. She was barely 17. I was thirteen years older. She lived in Toowoomba on the Darling Downs - the "Garden City". We had both enrolled in a mask and movement summer school led by a woman who had just returned from Europe after being trained at the Le Coq school of physical theatre in Paris. Judith was fantastic. She inspired us and unleashed some aspects of our creative selves we did not know we possessed. I have vivid memories of my improvisation as the element of air. I pummelled the fields below me with my thunderstorm, I floated softly through dreamy still days and playfully picked up pieces of rubbish and whirled them into the corners of the room. I was ferocious, I was gentle. I WAS AIR. None of the other elements posessed me as this one did. All this with just me and my mask.

Mary loved it too. We bonded. We were a strange combination, a strange innocent combination. I still don't quite understand. It was a knowing that was never doubted. A mutual admiration society. A need fulfilled?

Through thirty years we've had our separate families; she's lived in London and worked in a physical theatre company; I helped set up a community theatre company in Australia and have gone on to work in local government running youth programs; she now works for a large visual arts production company in Brisbane, the city we both call home. We've never worked together. We have very different lives. We often disagree. But for thirty years this 'thing' has endured.

Brisbane has an annual festival. Mary and I always look out for something different to share. Often its an edgy dance company. This time it was jazz. Marialy Pacheco is Cuban. She was trained as a classical pianist and then at age twenty she discovered jazz. She went to Germany, lived there for five years, met an Australian who is an outstanding young choral conductor (Australian Voices), and arrived in Brisbane in 2009 to experience life far removed from Berlin, Havana, even Melbourne.

So there we were in the main square of Brisbane, backwater capital of Queensland, listening to a beautiful young Cuban woman recently arrived from Germany play like Keith Jarrett in a Belgian Spiegeltent. Marialy held us spellbound. At age twenty seven, she had the technique of a master combined with the beauty and innocence of youth. When she smiled the tent lit up. When she laughed she apologised. When she told her story it was infectiously awkward. And then she played.

Mary and I shared a table at the edge of the tent with some mutual friends but soon agreed that in the presence of such talent proximity was essential. At the end of each piece we crept closer, first sitting under the table perched on the edge of a ledge, next we crossed the walkway to take up a position beside one of the poles fringing the general seating and eventually ended up sitting in the second front row watching her fantastic hands effortlessly travel the keys of her borrowed grand piano. She wore incomprehensibly tall black stilletos which matched the ebony piano and played, eyes closed, in a state of bliss. Which is exactly where we were.

An hour and a half later it was all over. Mary and I had listened, laughed, swapped family updates and shared something which didn't seem to need words. We didn't go on for drinks. We didn't take up the opportunity to follow Marialy to her next gig. We just went home. Some things are simple.

I don't try and figure our friendship any more. It's just there.

If you want to here Marialy play click this link: Marialy Pacheco

wow she is indeed very gentle on the eyes and so beautiful to listen too. Very talented!

Steve I love this story. You nailed it when you said "I still don't quite understand. It was a knowing that was never doubted. A mutual admiration society."

There is nothing more wonderful to me than when you find that shared knowing with another soul. It's magic.

Really glad you shared this.
(And thanks for the mention.)

Dear poetic friend: how are you?


our poetry potluck is open, if you have poems (old or new) to share, link in NOW,
you can link up to 3 poems, the more you share, the happier we are.
Thanks for the participation! Tuesday 8pm is the deadline to link up, please hurry up!
Happy Monday Poetry Potluck!
Happy Tuesday!