Niguelas - quest for the Spanish Ibex 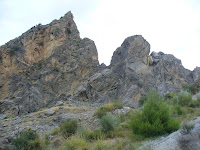 An account of my final day in the small village of Niguelas in southern Spain.


I had one final quest. I needed to hike into the hills behind Niguelas to experience the wildness of the Sierras.

This was partly due to my need to discover what lay beyond the village and partly to prove to an old friend in Brisbane with a Spanish connection that I was more than a lazy tourist, more than a town tourist. She was a seeker of the wild and had also spent time in Niguelas where her ex husband now lived. I could hear her voice in my head asking incredulously ‘you didn’t even walk up the gorge?’ I would have no adequate response and her next statement would sting me. ‘That’s the best part’ I could hear her adding disapprovingly.

We had met her ex by chance in the village earlier in the week. He had fled England twenty one years earlier to create his fantasy life in isolation in the Sierra Nevada. Three wives later he was still here and after twenty years of labour had almost accomplished his dream He had created a monster palace at the farthest point in the valley on the very edge of the National Park.

He was a man full of contradictions railing against the Britain he had abandoned, criticizing its social structures, its shallowness, its failed multicultural experiment. In turn he praised every aspect of Spanish culture, their sense of identity, their connection to their history, and their commitment to the extended family. He praised their connection to their food sources, their simple lifestyle and their care for the elderly.

In his own life he had built an expensive monument to himself, was somewhat estranged from his own progeny and lived a life of isolation behind high fences with trained guard dogs and a fabulous garden tended by paid gardeners and not an edible crop in sight.

Having inadvertently made contact we were invited for a grand tour and received rough instructions as to how to access the wild area immediately above his palace. There was a chance of sighting an ibex or a minx in this immediate and somewhat remote area.

So, late on the final afternoon of our stay I announced that I was heading inland and would be back in two hours – I had promised to cook on this, our final night. Fifteen minutes later I stood on the edge of the watercourse with a choice. A dirt road forked left and followed the river. Another, to the right, climbed steeply up the mountainside and this one was signed. An image of a hiker with a walking stick pointed the way to a village seventeen kilometers distant, high in the Sierras. I made an instinctive decision to follow the hiker sensing that it would lead me to the promised plateau teeming with ibex.

Full of energy and driven by high expectations I strode out and up checking my watch to time my ascent - fifteen to twenty minutes to the high country was the estimate.
The first five minutes were steep but as I was fresh posed no challenge. The road looped back on itself as it climbed, each time moving further up the gorge with the sound of the tumbling stream below.

Five pm in Spain in July is like Two pm on an Australian summer's day and I’d come with no water. At the ten minute mark and still climbing steeply my mouth and throat felt like pieces of cardboard. The sun seemed to increase in intensity with each step and my thoughts turned to collapse and death in the desert. I had a mouthful of dust and there was no sign of the aquifers which seemed to feed every other square metre of the valleys of the Sierra. I could still hear the sound of water now well below me.

Where I stood all was silent. Not a breath of air rustled the brown heath covering the hillside. I was beginning to doubt my choice of path. I concluded that I’d made the wrong choice at the earlier crossroads. I should have been following the water course. A fifteen minute scramble would have taken me up and over the cascades which teased me in the distance. I would have arrived at a lower plateau where I would have had the opportunity to eyeball an ibex or wild cat. 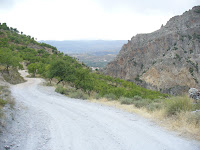 Resigned to disappointment I slowed my pace and trudged on, first looping right, then left and with no end in sight. Each switchback revealed another stretch of dusty road. I looked at my watch and decided to give myself another five minutes. That would take me to twenty-five - five beyond my original estimate.

I was thirsty. Here I was in the highest mountain range in Spain where the peaks sport snow nine months of the year and which supply a year round flow of high quality water. Over five hundred years previously, the Moors, who were the dominant force on the Iberian Peninsula developed a network of channels which divide and merge thousands of times ensuring every village and every orchard receives its share of this essential life force.

I had chosen the one road where the Moors had decided there was no need for irrigation or water flow. I was feeling a little disenchanted in my adventure. Despite every arable site within my view being planted with almond groves I felt as if I was in the desert. 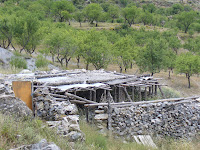 I turned another corner and, up ahead, spied what appeared to be the remains of ruined cottage. At that moment I also heard the cool gurgle of water. There shooting across under the road was a small waterfall from heaven. I bent down without thought or concern for its quality and splashed handful after handful over my head and face.

I made the ruin ahead my target and decided that come what may I’d be turning back no matter what I found. As I approached the pile of rocks I sensed that perhaps the promised plateau might lie another one hundred metres ahead and so I trudged past. 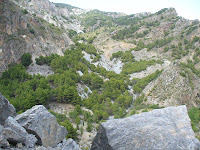 It wasn’t majestic, it wasn’t the plain I had expected, but the road did level out and there was a sort of valley in front of me where the road hugged the hill following its curves before disappearing into the next chasm. On my left was a series of rocky outcrops at the foot of which was half a mountain’s worth of large shale pieces which had collapsed over the centuries and covered the steep hillside in a mosaic of gray.

I was looking for shade and a place to sit and relax for five minutes. Even at this hour, by now after six pm, the sun was still bearing down at an acute angle. There were patches of shade in the lee of some rocky outcrops nearby but by far the best spot was about thirty metres off the roadat the base of a sheer narrow cliff which ran north south. There the shade was a bit deeper and faced the valley below.

I stepped off the dusty road and began rock-hopping towards my chosen spot. I was concentrating on my feet as I stumbled over the unstable shale and at the halfway point a loud rumble stopped me. I looked up to see a scatter of pebbles tumbling from the ledge above. One large rock followed and crashed precisely on my intended resting place.

Immediately following this near death moment two ibex appeared, a mother and her kid. These two native goats stood nonchalantly atop the cliff surveying their domain. After all the dust and heat, the gods or the laws if yin and yang had rewarded me. I stared at them and they stood and stared a me. We were, all three, transfixed. 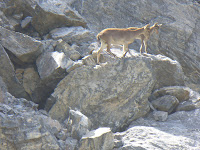 The scene wasn’t lush and romantic – on the contrary it was harsh and raw, but the moment was surprising and exquisite. I felt a quiet satisfaction with my poor choice making.

I fumbled for my camera and pointed it in the direction of the twin ibex and shot off one, two, three shots in quick succession. As if they wanted me to think that they were mere figments of my imagination each time I found them in my digital viewfinder and focused, they had moved. To add to my difficulties the overhead sun caused my screen to become unreadable so at best I was guessing. The whole sequence lasted only a few minutes as mother and offspring navigated the shale down into the valley.

I sat still and quiet in the full sun for another fifteen minutes, my need for shade forgotten. Not a thing stirred in the view before me. I had that wonderful feeling of being the only person in the universe to have witnessed such a moment and only towards the end of my reverie did I notice the pile of almond shells sitting at my feet. I had not after all been the first.

My walk back seemed much shorter and instead of focusing on the heat, the dust and my feetI enjoyed a short cut through the almond grove hugging the slope on the eastern side of the ibex pinnacles where I discovered a set of brass climbing pegs snaking up the cliff face. Nearby some abandoned ropes and a disintegrating satchel adorned the crumbling wall of the abandoned shepherd’s hut. Evidence of rock climbers of the human kind. 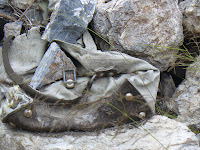 Closer to home raucous voices called playfully from the gorge below. The sound of people frolicking in cool flowing water. Smugly I walked along content with the knowledge that no self respecting ibex would be seen anywhere near such a noisy scene.

As I approached my starting point the final element of the ibex adventure fell into place. There daubed on the back wall of the self congratulatory mansion was piece of graffiti. Only visible to those who ventured beyond the head of the valley it read: ‘es tu oportunida acaba el muro cojera’. Roughly translated I think it says ‘fuck your wall’. So much for loving and caring.

At seven pm on schedule, out of character and much to my wife’s surprise I appeared at the door of our cottage to share my story. And there, to my relief, on two of my fourteen photos, were the fabled ibex. Proof.
Posted by little hat at 16:37

Great story Steve. I particularly love the encounter with the Ibex - for some reason I always look for meaning in these moments. And you paint a great picture of your friends ex.

Thanks Jennifer. You mean some symbolic moment? A spiritual meaning beyonf the immediate? Funny my mind doesn't seem to run in that directtion beyond a sense of wonder and wonderful. Though i do believe the other moment is also there. Perhaps even in the telling of the story in its simplest form it hovers there.

how are you,
I wonder if you are interested in attending my poets Rally week 30.
write a poem,
link in, comment.
favors are to be returned by fellow poets for sure.
cheers!
let me know only if you are ready.
Thanks in advance!