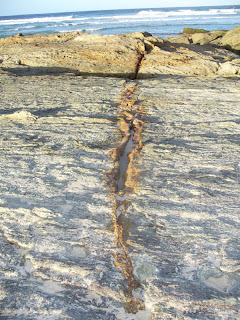 Deadman’s Beach
“In 1956 a skeleton and a boot were unearthed on this beach. Thought to be that of a sailor from the ship named Prosperity en route from Sydney to North Queensland with a cargo of sugar machinery. It sank in the Coral Sea off Point Lookout”

Too many young men lie dead in Dunwich Cemetery
Sons of Stradbroke Island
Their polished headstones grieving for lost youth, lost life
The inevitable outcome of a son’s obsession with the sea.

Their faded faces are alive with youth.
Burnt nut brown by the sun.
They carry fishing rods and surfboards
And pose beside utes and boats and in front of fibro fishing shacks.

Locked in a constant gaze, fixated on a distant shore
Exchanging knowing looks with giant Eucalypts above
With the wind whipped bay beyond the boat harbour
The scorching sun and drenching rains above.

Beside them lie the elderly pioneers on this ancient land
Their gravestones melting in the intense heat.
Some are borne from these deep sands,
Some are orphans adopted by this intoxicating island
The Walkers, Coolwells, McDonalds,
English names displaying their proud yellow, black and red,.

History lies here undisturbed, unearthed
The stories of millenniums buried in the sands
The tides, the winds, the land, shifts and moves
And calmly holds its breath
As tourists in their 4 Wheel Drives pass by intent on heading for the east
To Deadman’s Beach.
Posted by little hat at 21:58