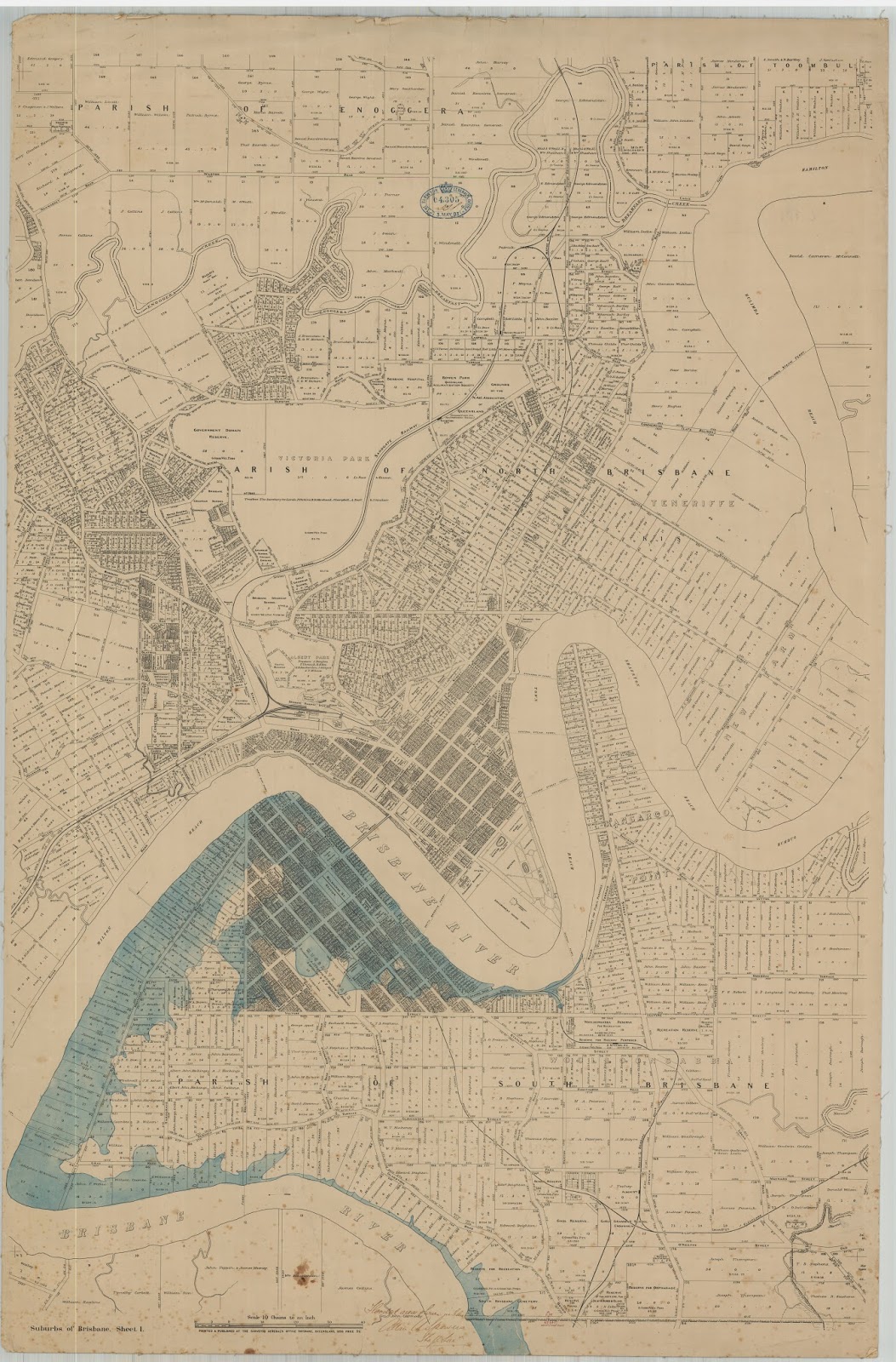 This is a map of the Kurilpa Peninsula in the great 1893 Brisbane flood. It peaked three times in the one month. The shaded area marks the flood plains comprising the suburbs of South Brisbane, West End and the locality of Hill End.

I've just completed a local history walking guide which covers the area, the river plains in the south west corner of this map. Hill End. It's where I live. In the most recent major flood, 2011, my house was well above the flood line but in 1893 we would have gone under. That's almost unbelievable given how high we were above the water in 2011 despite the fact that it approached our front gate.

The West End Making History Group, of which I am part, has created four walking guides to the peninsula, this one being No. 4. I'm learning more about the difference between writng a history based guide and leading a history based walking tour from this process (this is my second guide).

The publication tells a story with the river and its impact on the community and its evolution as its focus. The river is the skeleton around which the guide is built. And I would have thought that the walks we lead would simply be a translation of that guide into the spoken word. Wrong! When confronted with a group of humans standing expecting to be told a story (the same one?), it becomes clear that there is a whole back story which needs to be told to fill the gaps and turn the skeleton into a body.

So I've spent the last week (after the guide has gone to the printer) researching and revisiting every aspect of the walk to find more flesh for those bones. It's surprised me but has given me a new appreciation of those who call themselves professional historians. They read everything available, whereas I read what I need to read to create the story. It's my theatre background - tell the story, tell the story - edit! edit! Simplify, find the essence!

I'm close to understanding what I need but now I need an historian's mind to remember all the details. Oh God. I thought I had finished all the hard work.

The guide, "Strolling the Flood Plains of Hill End", gets launched this Friday 7 November at the local bookshop - Avid Reader in West End. Come along at 6:30pm and say hi if you're in the area. An electronic copy of the guide will be available on our website by the end of the week.

Great stuff! It's really advisable to have a good look at the history of the land your houses are on. That will help you watch out for the recurring calamities, and the extent of the damage those can inflict, not only for the benefit of your property, but so that you can mend the repercussions as well. I'm pleased to know, however, that the flooding situation was alleviated over time. That is always a relief, but you should always be ready. All the best!