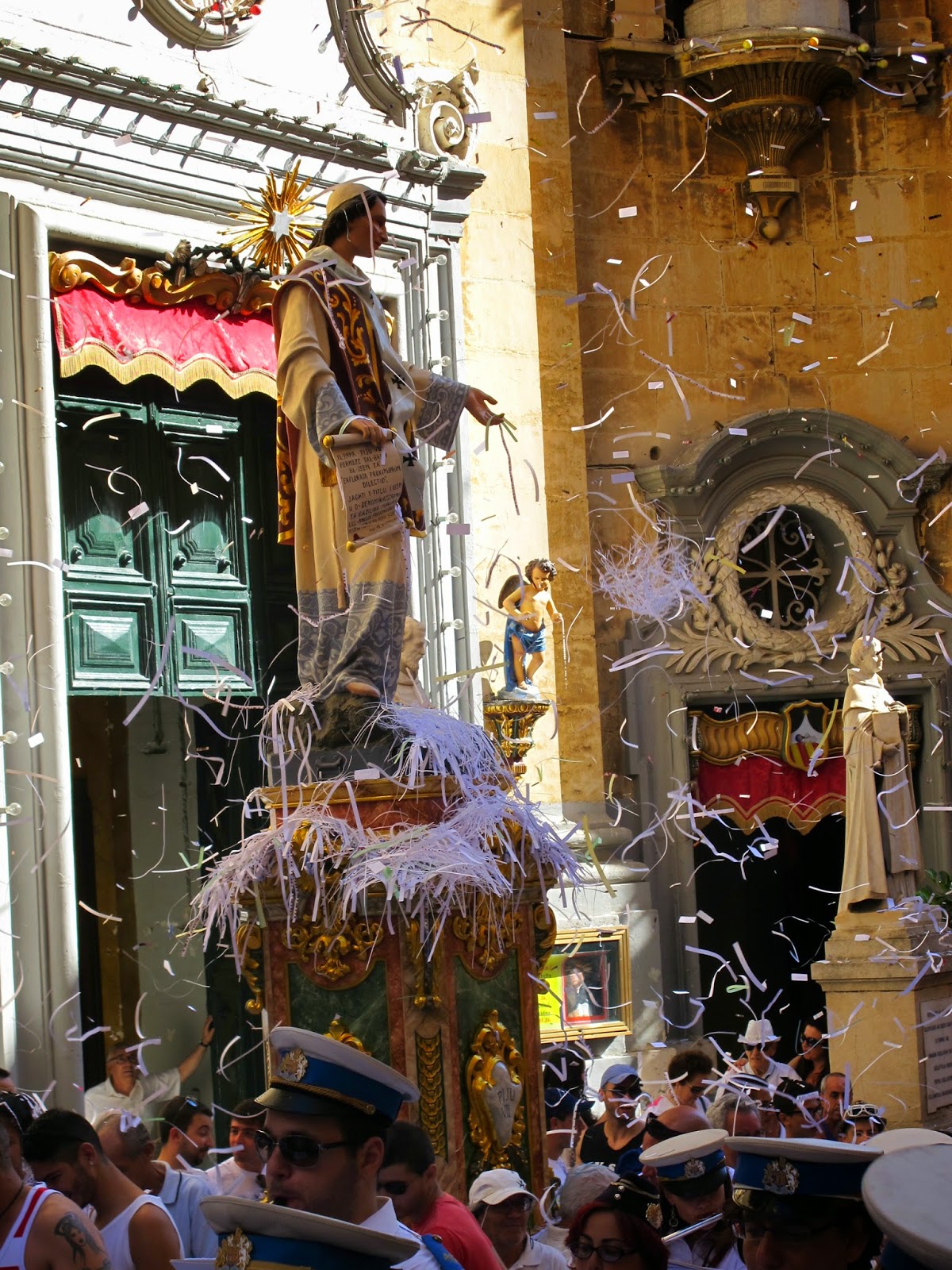 St Dominic’s Festival (and my last post from Malta)

I was brought up Catholic. I was quite a devout young lad. Attendance at nine first Friday masses (first Friday of each month for nine consecutive months) earned me a plenary indulgence (guaranteed entry into heaven). At thirteen I seriously considered that becoming a priest or Christian brother might be my vocation - until puberty kicked in and pleasures of the flesh and guilt and more guilty pleasure made me reconsider. Incense assaulted my nasal cavities regularly; Latin masses were powerful (if unintelligible) rituals. I was confirmed and took the confirmation name of Francis which I subsequently refused to acknowledge as it seemed like such a goose of a name - why hadn't I chosen Paul or Patrick or some saint with a cool name?

I was, at that stage, definitely in the mould of the apostle who pretended he wasn't. Although my religious inclinations continued into my tertiary life (where I was the president of the Tertiary Christian Students group at UQ for a year before I had my final crisis of faith) I never went back. I now go to weddings and funerals and can't see Catholicism as anything but a cult.

All this is by way of saying that this background did not prepare me for Malta and its saints. Let's get some statistics nailed down here. Malta consists of two islands whose combined total area (316 sq km) is a little larger than Stradbroke Island off Moreton Bay in Australia. Stradbroke is a beautiful sand island with a population of 2500 and maybe five places of worship, each the size of a large matchbox. Malta has 460,000 residents, 350 churches, each built from limestone and each a majestic work of art. The largest has a dome taller than St Paul's in London. There are tens of thousands of public shrines and statues and devotional entrance niches, not to mention the household shrines and images of devotion (the lift to my apartment has two!). Malta is 97% Catholic. The crusading Knights of St John and their version of the Inquisition made sure of that.

There is an old Jewish quarter by the Jews Sally Port, the only entrance through which the Jews were permitted to enter and exit the city, but there are only a handful of Jews remaining in Malta (they were forcibly expelled by the Knights in 1492). I had understood this archway to be called the Jew's Gate (as this was the colloquial name by which it was introduced to me) but learnt that a Sallyport is a general term for a controlled entrance to a fortification or a goal. We still use the word when we talk about sallying forth for a stroll or a look around. It's actually a military term meaning that troops would sally forth - on a raid. 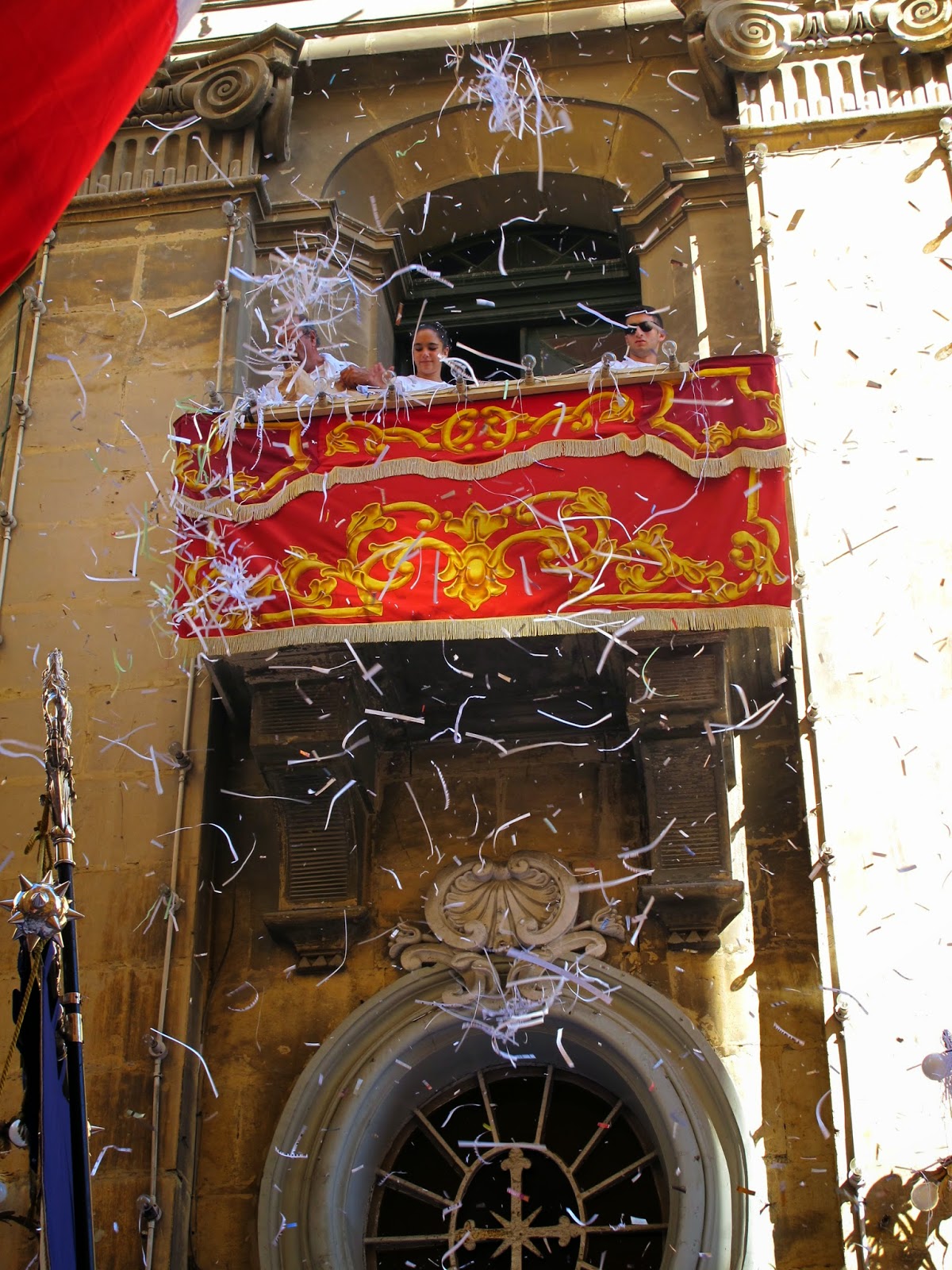 The Muslims/Arabs were here for 400 years; there is one mosque. The Romans were here for six hundred years and there are only a handful of  Roman ruins. There is a substantial Anglican Church which, ironically, features on many Valletta postcards. It was commissioned by Queen Adelaide in the 19th Century when she visited her island and realised that there was no place of worship for her English subjects. If she was attempting to establish a religious foothold on the island it failed miserably. The three percent non catholic population are, to all intents and purposes, invisible.

Malta is a nation of true believers. The Catholic faith arrived quite late following in the cultural footsteps of the Phoenicians, the Carthaginians (from north Africa), the Romans (600 years), the Byzantines (Constantinople based), the Arabs (400 years), the Normans (200 years), the Spanish (300 years) until, in 1523 the Knights of St John were offered Malta as a secure base after they were expelled from Rhodes by the Ottomans. They ruled the islands for almost three hundred years until Napoleon arrived. It became French for two years and then the British, at the invitation of the Maltese, liberated them and they themselves ruled until 1964.

I hope you're not finding this too tedious, it's just that as an Australian this sequence is mind boggling, almost inconceivable (and I haven't even mentioned the ancient prehistoric temples which dot the island and date from close to 5000 BC). Malta might be in the centre of the modern Mediterranean shipping lanes with regular cruise ships dropping by but, for the previous 3000 years, these were two islands in the middle of nowhere, beyond the horizon from Sicily or north Africa, barren and inhospitable. 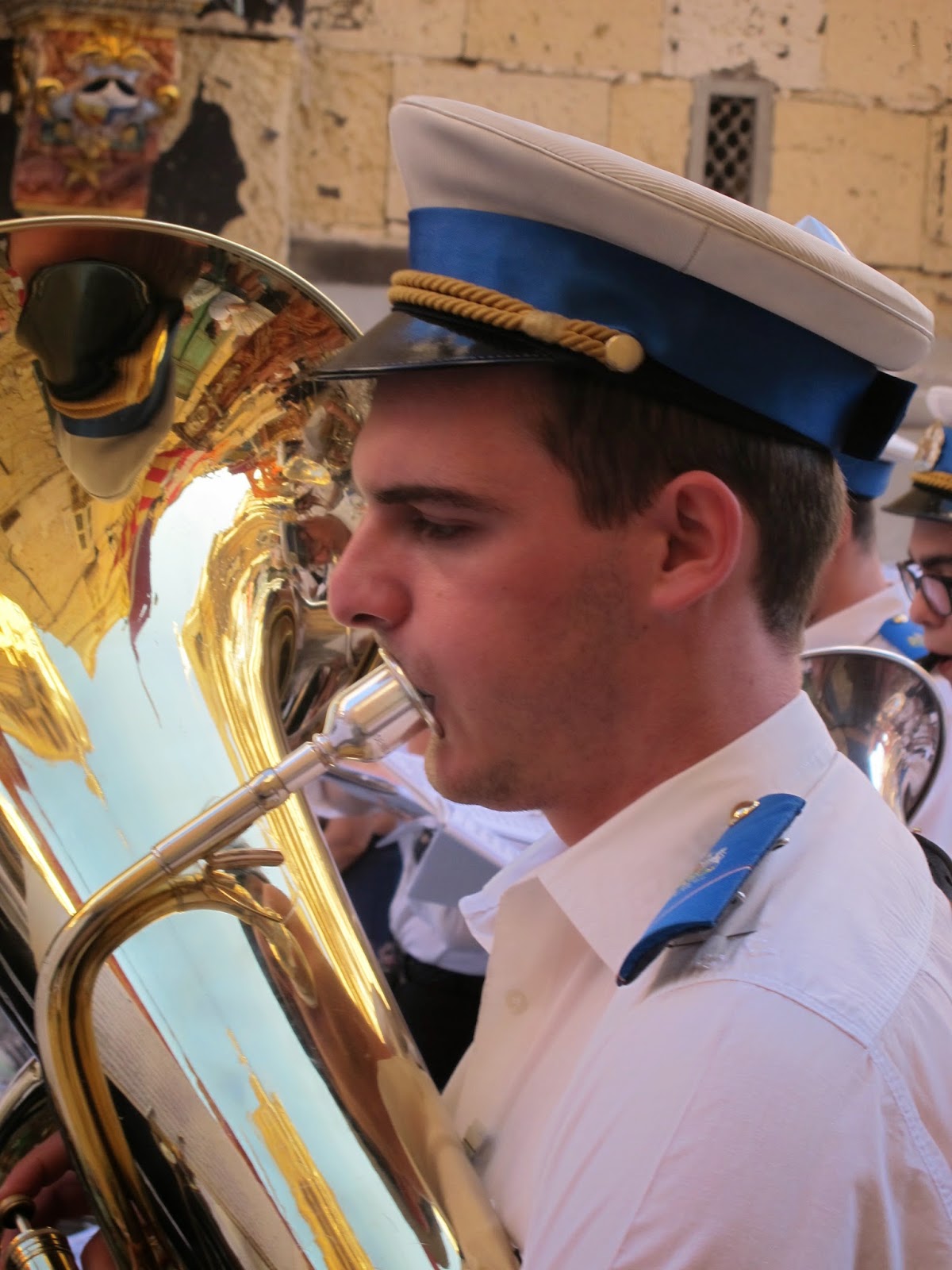 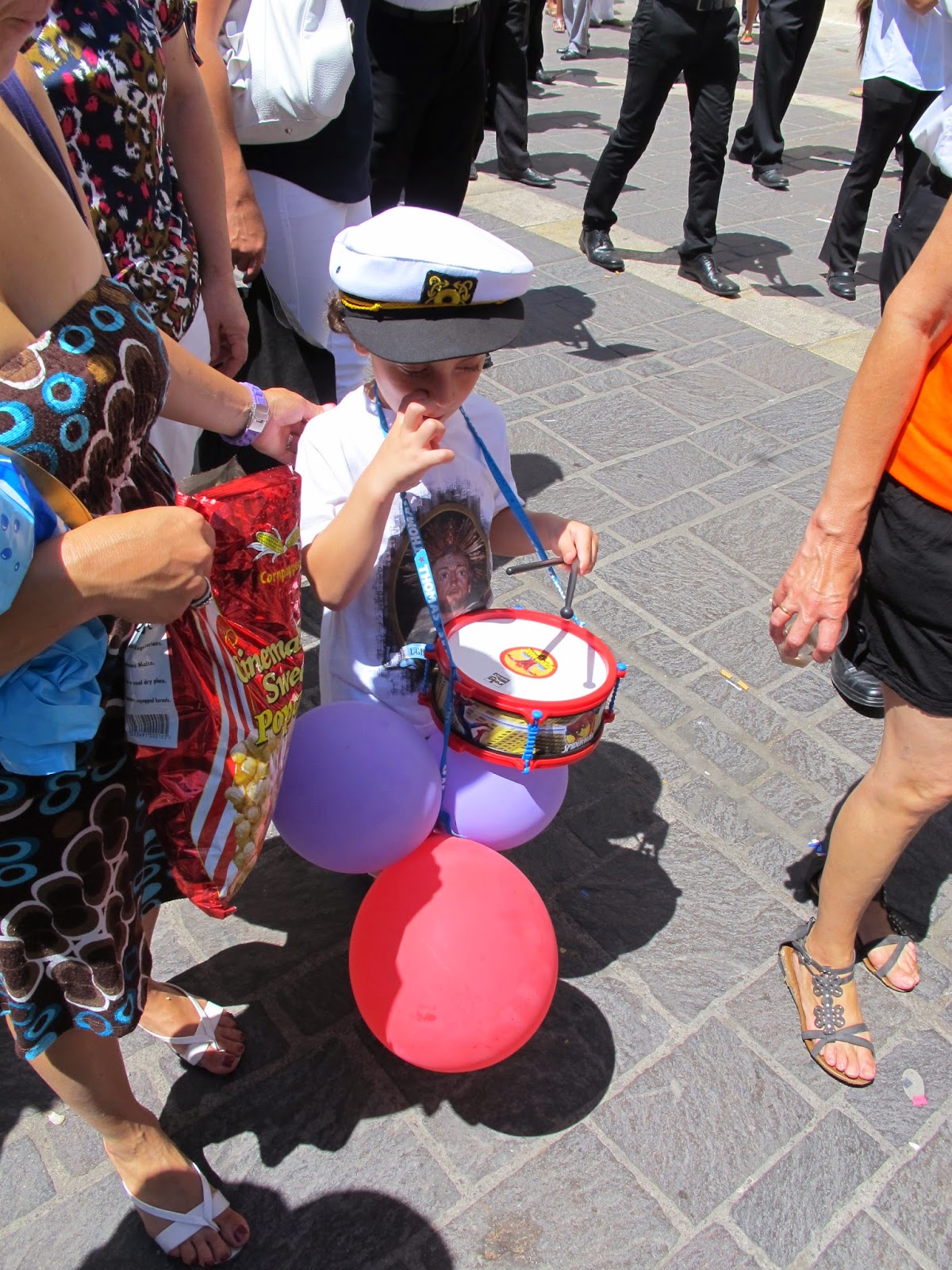 Bear with me as I inch closer to St Dominic. Back to the churches - three hundred and fifty across the two islands of which twenty five are within Valletta (population 6500, area 0.3sq mile or 0.8 sq km), each with their own saint on their own saint's street (my apartment, for example, is bordered by St Dominic, St Paul, St Ursula and St Christopher streets) and each with their own festival week. There is  some doubling up of saints, (multiple churches devoted to the same saint), a miracle of sorts, which means that there is a festival taking place somewhere in Malta every week during festival season, May to September. And there are eight religious orders resident in this 0.3 sq miles. The Maltese seem to have become addicted to invasions - they set off explosives using mortar shells each night to alert the community to the fact that there is a festival on their doorstep (as if they need any reminder). So small is the island that I have heard the noise, like rolling thunder, from across the island almost every night for the past ten weeks.

Here's a few of my favourite saints and their special intercessionary powers:

St James - disciple of St John the Baptist, put to the sword by Herod. Patron saint of blacksmiths, equestrians, veterinarians, apothecaries and of course pilgrims. Legend has his body being transported by angles in a rudderless boat to Spain and hence the pilgrim's walk to Santiago de Compostela.

St Lucia - Sicily born. She is often depicted carrying a tray containing a pair of eyes. She gouged them and presented them to her jilted lover before being murdered by him. She  had chosen the life of a nun over him. Patron saint of the blind, writers and those suffering sore eyes and sore throats.

And skipping the other three hundred we come to St Dominic (Diminuku).

Where should I start? Born of Spanish nobility in Castile in 1170, he is a fairly recent saint. He is patron saint of astronomers, scientists, of the falsely accused and of Valletta itself. His mother may have been a little bizarre as she had a vision during her pregnancy of her unborn child as a dog carrying a torch in his mouth - which is why Dominic is often depicted accompanied by his puppy with his torch to light up the world.
St Dominic's festival filled the week leading up to the weekend of his feast day (actually August 8th). Typical of Malta's festivals it combined explosives, fireworks, incessant bell ringing, with daily/nightly parades of his statue through the streets born by eight white robed heavily sweating men with disfigured shoulders (their badge of honour after many years in the role of bearer of this weighty statue), and accompanied by a brass band which played for close on three hours each circuit. Dominican monk's wear white but are also known as Blackfriars as a reference to the black hooded cloak they wear as an over-garment.

This was not a parade to be rushed. Each outing St Dom inched his way through the narrow streets, confetti raining down on him from the balconies above until the streets were ankle deep in shredded snow. The streets themselves were lined with oversized statues of angels and other saints each on an individual plinth and framed by heraldic cloth hung along and across the streets transforming them into avenues lined with sumptuous red and gold fabric. This was accompanied by Holy Masses celebrated several times a day in the basilica which was also decked out in red. Rich red velvet hung from every flat surface - pillars, walls, window frames etc. 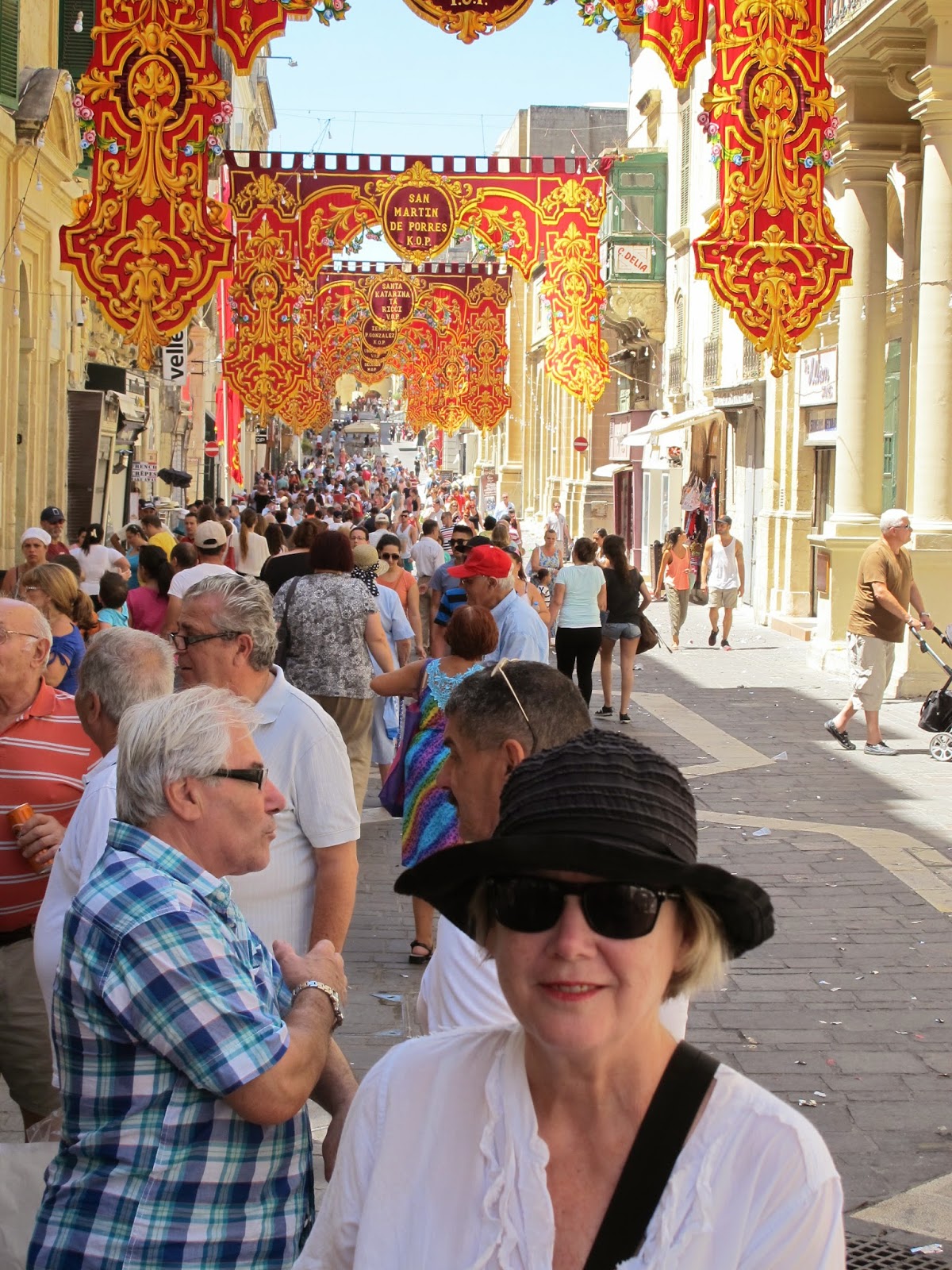 St Dominics also happens to be the parish which includes the Presidential Palace so, on the Saturday, the parade wound it way around the palace and at one point was greeted by the President of Malta, Marie-Louise Coleiro Preca, who arrived in her black limo, accompanied by her security contingent (black sunglasses, dark suits) and alighted to pay her respects to St Dominic and his devotees. She was greeted rapturously and led into the palace by a Maltese man carrying a stubby of beer. She was giving her minders hell as she kissed the babies and shook hands with all and sundry and then invited the masses to follow her into the palace courtyard where more kisses took place and a spontaneous rendering of the national anthem was sung. The parade then continued for another two hours.

Andrea, who had witnessed the Presidential moment while shopping for food, came home to share her experience and an hour later we headed out for a stroll and met the parade, still every bit as enthusiastic, returning from its two hour palace circumnavigation. Those poor brass band musicians were still blasting away on their trumpets and trombones and still in tune.

Come the final night (Sunday) and Andrea and I headed off to a concert in the Knights Hospitalier, a huge 16th Century building in our immediate vicinity which was built by the Knights as a hospital and continued as such for over 400 years including up until the end of WWII. As we left the concert we assumed that the festival had run its course but something drew us the few blocks to St Dominics for one last look. 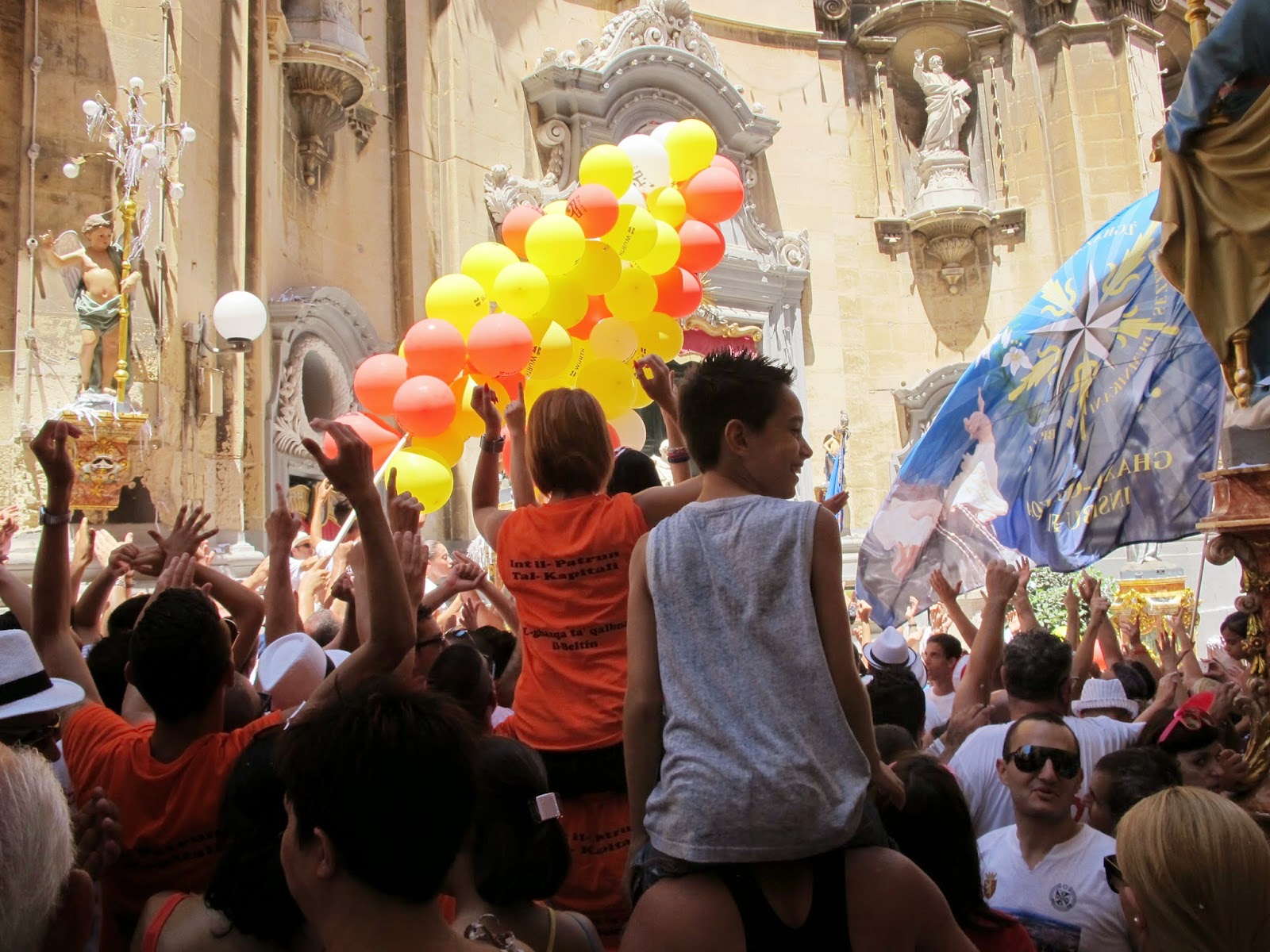 Talk about good timing. We arrived to see St Dominic a mere fifty metres from his final destination, the front door of his basilica. The crowd was thick with passion and expectation. The brass band played, the parade inched forward, the crowd chanted, the children on their fathers’ shoulders called supplications to the saint high above their heads, church bells rang and fireworks exploded above. At one point a woman with a microphone led the crowd in the national anthem. That fifty metres took close on an hour. It was hard not to be moved, such was the emotion of the moment. I am not a believer, despite my early devotion to all things religious, but I could appreciate the power, some might say mesmerising, intoxicating power, of this experience. This annual festival (repeated many times over across the nation) is a true community celebration of a fundamental set of beliefs which may explain how these people have weathered so much adversity over hundreds of years and survived emotionally, culturally and finally become an independent self governing nation.

As I sit here writing this another salvo of explosions bursts outside my window, launched at 7am on this Friday morning from a barge in the middle of the Grand Harbour heralding the beginning of St Lawrence's Festival at Vittoriosa, across the water. Move over Saint Dominic it's Larry's turn.