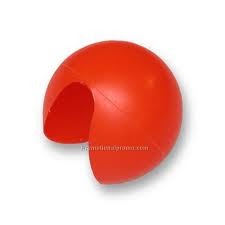 I was once a clown. I have told my ni-Vanuatu colleagues about that era in my life. They laugh at me a lot. Perhaps I carry my clown closer to the surface than I realise. I'm okay with that. Sometimes there's a danger with giving yourself a label. Some people might use it as an excuse to dismiss you and diminish what you have to offer. That doesn't worry me either. I trust my colleagues to judge me by what I do.

On this my fifth trip to these islands I sense that I have gained some respect and trust with this group of workers. So on the second day of our preparations for our five day workshop I whip out a red clown nose and place it in the middle of the table we work around. I tell them a story. The story of the Court Jester, who is the King's fool; the one, and only one, in court vested with the right to speak the truth with impunity. I tell them that this red nose can be a very powerful symbol. That, if used wisely, it can become a metaphor, a tool for them in tackling tricky situations in their role as facilitators; in dealing with chiefs.

This group is comprised by a few who have chief status but the majority are ordinary community members,  young and old, men and women. They are aware of the protocols of Vanuatu life. Society appears very relaxed but the rules are clear. Women do not speak directly to chiefs; young people do not have a voice in decision making; the chief's is the ultimate voice. I ask them where that leaves them as facilitators. Do they have a mandate to disagree with a chief? Can they raise contentious topics? When are they empowered to take control of discussion groups? Can they step in when the discussion goes off track?

They like the clown story. They understand that there are times when the obvious might not be stated for fear of offending. They are a little afraid for the 'Fool' in the King's Court. Is immunity guaranteed? They note that the 'Fool' is alone. Who will support him? 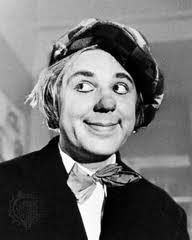 We don't go into role as clowns but Christian picks up the clown nose and dons it, immediately inventing his own gibberish language. On his large oval face and shaved brown head he has become an instant clown. It's a perfect illustration of the form. The red nose has obviously crossed cultures before my tabling of it. I ask them to think about using it, not literally, but metaphorically, during the next week when they want to remind themselves that they are giving themselves permission to speak 'out of turn' but with good intentions.

Over the next week I too, literally at times, grab the red nose and warn them that I am about to comment on aspects of the workshop that may make them feel uncomfortable and which I am seeking to bravely draw to their attention.


It's a work in progress. 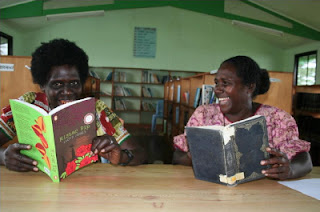 Strangely when I arrive back in Brisbane a week later I am looking for a new book to read and pick up a novel that my wife recommends. It's called Mister Pip by New Zealand writer Lloyd Jones. It's set in a Melanesian village on the island of Bougainville off New Guinea and within the first five pages there is a startling image of a lone white man wearing a red clown nose pulling his Melanesian wife along on a cart through the village. It's only in the last five pages that the significance of this is revealed.

It's a great book, based around Charles Dickens Great Expectations woven through traditional village life in a time of civil war. It's a book of great hope and redemption and explores how lives and concepts can exist across cultures and ultimately the power of a story to transform lives.

Very interesting. Amazing, the insights and possibilities that can be extrapolated from something as simple as a clown nose. Well done:)