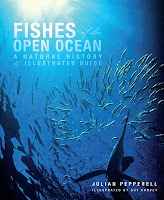 Julian Pepperell (Jules/Big Julie/Jaws/Big Fish) is in print. Again.
His new Book is Fishes of the Open Ocean. 266 pages of magnificent colour illustrations, scholarly information about hundreds of BIG Fish (accessible to the average joe/jill or non game fisherman/person - its exhausting being politically correct). It's coffee table size and ten years in the making - about how long it would take me to make a coffee table.

What's in it? Fish. Big fish of the game fishing type and of the predatory type. My daughter particularly enjoyed the shark section. Jess is 27 and has a fascination with the idea of swimming with the big ones one day. For mine I am convinced I could walk on water if ever i find myself in the same ocean as a man eater. Man eater - it's not a subtle tag.

The shark section is one of seven in the book. I thought I'd share a couple of thoughts about them rather than do the whole book.
SHARKS
1. There are lots of them
2. Many of them have very big teeth, jaws, appetites
3. They have cute names which are a dead (did I say DEAD?) giveaway to their personality types Tiger, Thresher, Hammerhead, Bull, Cookiecutter
4. Some prefer to keep a low profile with names like Silk, Salmon, Blue, Dusky, Basking Shark.
5. The largest (Whale Shark) is a filter feeding shark which gives me some hope. I'm looking to be part of what gets filtered out.
6. Many are threatened as they are slow to mature and thus breed and are victims of long line fishing and other by-catch processes of the large industrial fishing industry.

The one which unnerves me the most is the Bull Shark. It is one of the three most dangerous fish on the planet says Julian and it frequents rivers and estuaries.
As I sail on the Brisbane River (so does my daughter) and they have been sighted (and had a nibble on people) as far upstream as Ipswich (probably 40 km from the mouth) I am always a litt;le nervous on Saturdays. Moreover, visibility in the Brisbane River is about 20 cm on a good day so there is no way of having any warning of their presence. Perhaps this explains why the sailors of the South Brisbane Sailing Club are renowned for their ability to right their crafts in record time following a capsize.

Julian gives some comfort to victims and potential victims by saying: 'its attacks on humans are thought to be random and accidental' . Reassuring!

So if you're into Sharks, Rays, Billfish, Tuna, Mackeral etc etc this is the book for you. It's beautiful and a beauty. 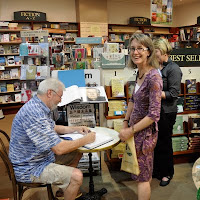 I highly recommend it.
Posted by little hat at 15:59

Wow. My first review and not a rotten tomato (cod) in sight.

Couln't find a cod and have just harvested my last two tomatoes from the tomato bushes of Lime Festival fame.
All the Grand Banks fisheries have collapsed according to my favourite book of the last 20 years. Ref "Cod" Mark Kurlansky, page....something.

Tomato cod, Cephalopholis sonnerati. A (bright red) member of the Serranid family of fish (other members, red emperor and coral trout), not to be confused with the poor old Atlantic cod (family Gadidae). The tomatometer is a very useful thing, for next time the tomatoes ripen .. (http://au.rottentomatoes.com)