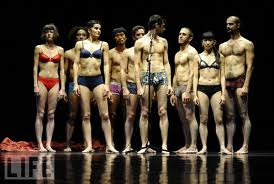 I have always been embarrassed by my back. From the front I am normal ( I am making some assumptions there but I can probably get away with that claim). Behind me lurks my secret shame. My scoliosis. It's not major. Nor is it minor. If I was a woman I'd be horrified but as a bloke I can get away with clothes that don't accentuate this deformity. I could never carry off a slinky silk number with form hugging low cut back. I've worn some weird stuff in my years but that I haven't tried. Maybe my back has protected me from some terrible decisions. I should be thankful.

So there I am in the fourth row of the audience waiting for the lights to dim on a dance piece celebrating one of my favourite choreographers of all time, the late Pina Bausch. Pina was famous for her non mainstream approach to dance using voice and ritual and gesture to evoke essences that catch you off guard. I only saw one piece in 1981 and I can still conjure up that experience - a dancer standing facing the audience cutting up an onion on a china plate held close to his eyes, a strange parade of dancers weaving in and around the audience doing repetive hand gestures drawn from everyday life.. That piece ("1980") as it turned out was quite lyrical.

Last night's piece "Out of Context - Pina" was about the boundary between the animal kingdom and we humans and at a fundamental level about opposites = Beauty and Ugliness. The performer's movements were not graceful. Their bodies jerked and convulsed and tic'd and took on groteque forms. At the same time their animal/human instinct to connect, to mate, to bond played out. It was both beautiful and harrowing. 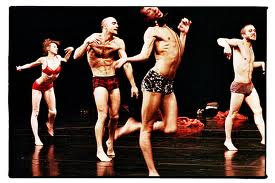 And then, without any pause in the performance, a young woman rose from the audience and slowly, painfully, with the help of a pair of sticks, made her way to the stage. On the way she was offered a chair and carried it to centre stage. Dressed in a dark blue silk dress she sat and arranged her slim body in readiness. I knew what was coming but I was still not prepared for it. I was already silently sobbing.

She began to move her arms, tracing curves and angles through the space around her. She very deliberately crossed one knee over the other with the help of her mobile hands. She uncrossed them and, tilting her head to one side, allowing her long dark hair to fall towards the floor, she traced a final movement with her upper body. 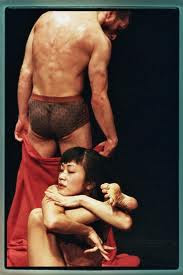 Once an outstanding dancer who had worked with Australian choreographer Meryl Tankard, who herself had been in that 1981 Pina Bausch show I had seen in Melbourne, this young woman has Multiple Sclerosis. She has not danced since her diagnosis. It made the dancers, working so hard to achieve distorted forms, seem both technically amazing and at the same time irrelevant.

How she could sit in the audience and see her pain portrayed on stage I can't start to comprehend. The joy she showed helped me comprehend that there is a power in us that allows us to meet the most challenging events in life with dignity and a positive spirit if we can tap that aspect of ourselves.

For my part, as I get older my vanity has fallen away a bit. Though I still don't like department store change rooms or getting undressed in front of strangers (the first time). Funny I still love swimming at the beach in my budgie smugglers, so my ego must be pretty healthy.
Posted by little hat at 17:06

Great post, Steve. I was in scanning mode but your writing made me slow down and re-read it properly.

Cara is right ... there is NO way I could have skimmed over your post. It is amazing.

Thanks for alerting me to this post, Little Hat. By coincidence I heard a radio program about this dance on Radio National's ArtMoves today.

The chhoreograoher, a Belgian man talked about his experience years ago working with disabled young people or people in difficulties as he expressed it and how this has contributed to his interest.

He had also seen a video of mentally disabled people who walked in a way consistent with their diagnoses and presumably also with their heavily medicated states.

He used this as the impetus to get the dancers thinking about such moves.

You've just added a layer for me about this amazing project in your terrific post. Thanks.

My oldest brother also suffers scoliosis. He suspects on the strength of my mother's poor diet while she carried him throughout the war.

It's amazing how disturbed we can be by and about our body's failures.