Paddy and the Richmond 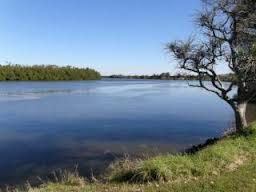 "Oh, it'll be on for sure. They're setting up the tarpaulins as we speak"

It's pissing down here in Brisbane. Has been for four days straight. When I check the satellite image for Ballina a sea of blue with occasional yellow and red spots twinkle at me from my screen. This weather pattern extends 250 kms from here to the mid north coast of New South Wales. My distant cousin John, the convenor of the New Italy Carnevale, is an optimist.

I'd cancelled the  trip three of us had planned to fish the Richmond River on the advice of Uncle Paddy, my north coast fishing guru. "We had 4 inches of rain here the other night Steve. True! I've got a moat around my house. Too much fresh in the river Steve. Be a bloody waste of time." That was three days ago and it's still raining.

I'm facing a solo trek and a choice: drive 250 ks and waste my time or take a chance on the Carnevale. Paddy calls at 2pm. "What do you reckon Steve? I won't be goin' if its raining mate. The doc says I need to keep me bung eye dry." "I'll be there at 5" I say. Paddy has offered me a bed for the night. He's 86 and lives alone. He wasn't up to having three guests but he reckons he can cope with one. I sense he's a little hesitant. He's been full time carer for my aunty Rita for the past three years and since she passed away he's slowly recovering from the loss of Rita and the loss of  four years of his life. He's sick of looking after people.

I don't turn my wiper blades off for two and a half hours. At times the road ahead looks like I'm driving into a snow drift. I can't see past the bonnet. Occasionally it eases, seducing me into a false sense of hope and then smacks me again like a mini cyclone slapping the side of the car. This is ridiculous.

Remarkably it's not raining when I take the turnoff to Titenbar and head for Wollongbar. Avocado orchards line the back road as I enter and emerge from what's left of the original rainforest. They called it the "BIG SCRUB" in the old days and the locals cleared it by hand. Hundreds and hundreds of acres. They're very proud of that achievement. Now its prime dairy and orchard country. It's like driving through English country side. It's deep green all year round.

Paddy is there to meet me at the door. "G'day Stevo" He's got me in the second bedroom. I insult him by offering to sleep in my sleeping bag and insult him again by offering to take him out to dinner at the local tavern. " I've got some steak for you. Do you eat steak? I've had it marinating in my special mix for three days." We sit and chat or rather he talks and I nod and ask questions. He's old school country is Paddy. Builder, duck shooter, pig shooter, fisherman. He's famous in the district for his knowledge. The story he loves to tell is the day he was getting ready to clean his favourite rifle on the back veranda and spotted a cat crossing the lane nearby and he let him have it. One shot. It was instinct. And a hatred of cats. The neighbour never could figure out where puss disappeared to.

Paddy is one of the gentlest people I know. He's a natural hunter gatherer. And he has developed that tendency of the lone householder to become a little fussy about how things are done. "No, Steve. Wait!" he stops me mid action as I go to make a cup of tea. I've filled the kettle from the tap. He empties it down the sink and fills it again from the jug on the side table. "Rainwater." Over the next 12 hours I notice him and his routines. And his generosity. I get offered the reclining seat in front of the TV to watch Black Caviar make it 25 wins from 25 starts.  Everything in the kitchen is spotless and arranged very carefully. When it comes to washing up he sets the water in the sink and adds the detergent. He won't let me clean the electric frypan. I haven't done the inservice training. I'm chastised for bringing bacon and eggs for breakfast. But all this lovingly and gently. "I like a clean house. I always clean up straight away so I don't have to come back and do it later" he tells me. It's touching and surprising in this man of guns and fish gut. The marinated beef is beautiful by the way, just as he'd promised.

"If its fine tomorrow I'll come" he says as we head off to bed at 8:30. "I'm an early to bed man, Steve. You stay and watch TV if you want." But I take Paddy's cue and crawl into the freshly made bed. "I hate electric blankets. Rita used to love 'em. I love getting into cold sheets and that slow warming feeling" he says by way of good night.

I'm awake at 6:30 next morning. I can't see the day for the heavy blinds. I decide I can go another 45 minutes before the breakfast I've promised. At 7am Paddy is standing at the foot of my bed. I know he's there. I can feel his presence but I pretend to be asleep. "You wouldn't believe it Steve. You should see the day outside." No, 'Excuse me Steve are you awake?' He reminds me of my mother. One up all up was her motto.

It's true, its a clear day. "Lets head off early" says Paddy. "Get there for mass." Jesus!
"Want to take the back road?" Paddy asks as we descend the Wardell road towards the flats. I recognise the landscape along here from childhood visits with my cousins. Lagoons full of wild duck. Concrete fords over constantly running streams. And the old Meerschaum Vale hall where my father danced and drank and grew into a man.

"We'll go the Bagotville Road." We go from two lane to one lane, from slick bitumen to neglected potholed and patched shortcut. At every turn Paddy has a story. "Jeez, that lagoon used to be black with Magpie geese in the old days. We'd always get a feed." We round a bend and a wide expanse of water stretches before us curving to the south in the distance. It's one of the loveliest stretches of river I can recall. A line of giant figs line the bank. Entwined with strangler vines climbing to escape the regular floods. "The flood of 54 came half way up those telegraph poles. He points out a level well above anything imaginable. "This section here is real deep," Paddy tells me, as we cruise past lines and fields of scrappy cane on our right. "Got some bloody good jewfish and perch on that bend. Full of catfish now."

And so the commentary continues. Each bend has a fish story. Each homestead has a family story. This is where he grew up. This is why he's brought me this way. He expects me to recognise the landmarks. But in all the years of my childhood my father never took us down this road. "Me and Percy built that house. Fay still lives in that one." His father got out of cane early and ran a dairy herd. "That heap of crumbling timber and iron was the old dairy" It looks like someone has taken a sledgehammer to it. It leans over like a drunk and threatens to fall face first into the sodden earth.

I see beautiful green valley and nostalgic river oaks. Paddy sees lives lived and lost. "That cane there is rubbish. No fertilizer. Now that deeper green paddock that's more like it. Some of em have given it away. The prices are just too low."

As we approach Wardell and our destination he tells me the story of his brother who died rescuing his daughter from downed power lines in the paddocks we've just past. They're boggy and the access lanes running beside each cane field are full of this weeks downpour. She was 16. A real handfull. Constantly in trouble with school and the local cops. She was wild. It was weather similar to the week just gone and she was riding home from school on her bike and didn't see the power lines lying across the ditch. She's plunged in. And zap. But miraculously she got caught but not killed. He hears her calls for help and rushes out and grabs the nearest thing he can see to free her from the lines. He grabs a length of timber from the ditch and wades towards her. The timber is wet and as soon as he makes contact with her he's the one who gets whacked. Somehow he's the conductor and she's earthed and it's him who is gone. Instantly.

Paddy tells the story soberly. "How old was he?" I ask. "62." Crikey. My age. He must have had children late. "Second marriage" Paddy adds. "And the daughter? Did she go on to live a settled life? Did she get a wake up call?"

"Plenty of flathead and bream under this bridge" Paddy tells me as we arch over the Richmond and enter Woodburn.