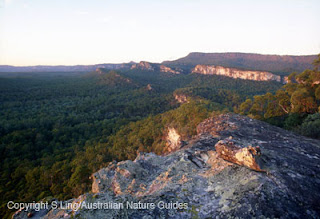 I'm off to Carnarvon gorge for a week with Denis (my Hummer co-driver), a mate of his and my son Nick.
We're going to drive for 10 hours tomorrow and then walk for 10 hours the next day and then recover for 10 hours the next day and then walk again and then drive back for 10 hours.
Sound like fun?
Yes I'm wondering too.
My son is very nervous about spending 5 days with three men more than twice his age.
I'm nervous too about spending all that time with my wonderful son. What if he gets really bored and starts complaining about being out of mobile range? Or worse he might start behaving like the 'jumping mouse' he was as an 8 year old driving me spare with his excess energy. Or perhaps it will be fabulous.
The latter I expect. No matter what there will be more stories and more photos.
And then I can finish the trail of almost finished stories I've posted on this blog.
Posted by little hat at 21:36 2 comments: 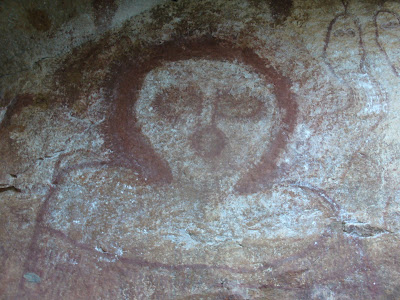 I didn't see much aboriginal art in our Kimberley trip but we did swim in a beautiful waterhole which had this Wandjina figure under a canopy on a side rock face.

Strangly I'd gone to the N/West with only one idea in mind if I was to buy any local art - and that was to buy a Wandjina figure. I'd waited twenty years for this. In the late 80's a local West End based Indigenous artist,Vanessa Fisher, had had an exhibition in a local hall - the Jagera centre - and she had a painting there which I fell in love with but couldn't bring myself to own. It felt too powerful, too spiritual and though mesmerised by it, I felt not ready to live with it. It haunted me for many years and though Vanessa offered to paint me another one this didn't feel right either.

So here I was in Wandjina country.

I saw a beautiful print in a local cafe on the day I arrived but decided to wait and see if anything else presented itself in the three weeks I'd be on the road.We visited four key galleries over that 3 weeks, one of which showed only Wandjina paintings and the others none. It is a very localised image. Still none of these captured me. The rock art piece, on the other hand, had exactly the presence I'd felt with Vanessa's painting. Spooky and of another world and time. I could hardly chip it from the rock face so I photographed it as best I could.

On arriving back in Broome I knew it was the screen print which was still closest to what I wanted so I approached the cafe with some excitement, scanned the walls and it was nowhere to be seen. SOLD. It had been on that wall for 6 months and I'd missed my opportunity.

With one last day in Broome Andrea and Pauline suggested I visit a particular gallery in the old part of town which they were impressed by. It seemed ethical and well informed they said.

I set off by myself while they cruised the Saturday market and spotted the place they were obviously talking about. I hesitantly enquired if they had any Wandjina paintings. There was a pause and then a confirmation. We happen to have only one and it happens to be here from the stockroom on the other side of town as someone else was also asking after Wandjinas. I was not being followed but being preceded it seemed.

The young girl, who was not a local but was very enthusiastic and well informed, fetched it from the backroom and hey presto, there it was. A big bold, in your face, take me if you dare painting that made the hairs on the back of my neck stand up. Yep. This was the one.

Price? Well to cut a long story short about 10 times what the print would have cost. I hesitated, thought I should probably consult my beloved Andrea about a four figure purchase and then thought bugger it. I'll take it, I blurted out. Later I asked Denis if he would be able to be in the room when I told Andrea. My human shield.

As it turned out I had misjudged my beloved's care and understanding about my quest and it was cool.

Strangely, when I took Andrea to see the painting the next morning, in the hour long window of opportunity we had before we were to board our flight to Brisbane, it turned out I'd gone to the wrong gallery. I'd chosen a tin shed. Theirs was a shiny slick place next door.

As well as that it seems that despite my lack of research, my impulse buy was informed by good karma - the artist turns out to be a highly regarded senior painter in the Wandjina tradition - Lily Karadada. 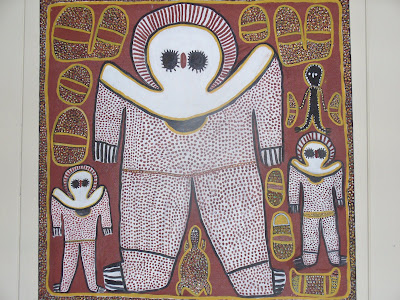 Tom was younger than I expected.

‘Hi, I’m here about the stretchers’ I greeted him with unjustified familiarity.

‘Oh Yeah. The Hummer bloke’ Tom responded good humouredly. ‘I’ve got them out the back’

Tom produced four stretchers in their bags and two inflatable mattresses. He’d kept his word. We insisted on unpacking them and setting them up in the car park.

‘Do you reckon they’ll fit?’ I queried Denis.

He looked back at me. Short of setting up the tent in the forecourt of the camping store neither of us could be sure. They looked smaller. I conjured up a picture of the tent in my head and another of me trying to fit two of these stretchers in where only one fitted previously. Without much conjuring I was also able to picture Andrea’s response if this turned out to be false. This second image came with a soundtrack. Shit I thought.

I turned to Denis, shrugged and told Tom we’d take them – but we really only wanted two.

‘We’ll take the double inflatable instead of the other two’ I told him.

We threw the stretchers in the back of the Hummer and followed Tom into the shop.

‘We need a few other things’ I said as we headed for the back of the store. A replacement bag for one of the sleeping bags, a set of mantles for the gas lantern, a tie-down for the jerry can Tim had lent us, (‘brand new’ Tim had told us ‘don’t lose it’ – come on Tim, since when do brand new cans have rusted bases. Tim was turning out to be an inveterate liar and not very convincing bullshit artist), a spout for the jerry can.

And as an afterthought a map of the Kimberley.
Posted by little hat at 20:43 No comments:

Tom turned out to be my contact at the Kimberley Camping Store. He seemed to be in charge. He remembered the order.

‘Yep. Really! They don’t fit?
Oh yeah, I did Vinnie a good deal with those stretchers. They were cheaper than the small ones.’

I gave a brief summary of the Vinnie conversation minus the tirade. Tom sounded understanding so I calmed the storm building in me and asked him to check what stretchers they had in stock and their dimensions.

‘What'll we do Tom? Can we do a straight exchange? Only slept on once or twice Tom. Good as new.’

‘If you give them a wipe down I’ll put them back on the racks and sell ‘em no questions asked.’

Tom was also happy to give me some prices and sizes of inflatables as our other possible option.

‘Put the stretchers and a couple of air beds aside will you Tom? We’ll sort it out on Friday.’

‘It’s all sorted’ I told the team.

‘Are we getting inflatables?’ Andrea asked pointedly.

I took another in a long line of deep breaths, tucked my frustration away behind my sunglasses and told her:

‘Vinnie said! But we can buy one ourselves to fit the small tent.’ I added.

‘Why? That’s not our problem. He should pay for that.’

The terrier in Andrea wasn’t going to let this go easily. She had Vinnie gripped tightly in her terrier teeth and didn’t seem to notice that Vinnie had me in his.

I started to shake a little. My jaw muscles were locked tight with tension. My eyeballs were fixed like concrete.

‘CAN WE JUST DO WHAT WE NEED TO DO TO MAKE THIS HOLIDAY WORK.! I AM MERELY THE MESSENGER.’

Said one word at a time through firmly gritted teeth.
Posted by little hat at 20:21 No comments:

‘Hello. It’s Steve here. I’m the bloke with the Hummer from Broome. Can I speak to the manager please?’

‘He’s in a meeting. Can he call you back in five minutes?’

‘Hello. It’s the Hummer bloke in Broome here. Can I speak to the manager please?’

‘No! I want to speak to him now. There are four of us here sleeping rough in the bush. I want this sorted out now.’

‘One moment. I’ll see if he can be interrupted.’

Vinnie doesn’t wait for my tale of woe. He launches into a passionate endorsement of himself. How he’d recently bought the business; how he didn’t have to honour previous bookings; how he was doing us a favour; how he’d gone to a lot of trouble to set us up well with gear; how great a car the Hummer was; what a mugs game it was to be in the camper rental business; how ours was the last renter he was ever doing which included camping gear; how lucky we were and how you can never make people happy.

‘Customers always find something to whinge about.’

I listened to all this in amazement. This man had just purchased a nationwide car rental business and he hated customers. What had he been thinking!

I took a deep breath. I reminded him that that I was one of his unhappy customers and yes, that I did have something to whinge about. I was still in possession of four oversized stretchers which some dickhead had never thought to measure against the tent they were meant to fit in!

I didn’t wait for him to find a solution. I had one.

‘We’d like two inflatable mattresses to replace the stretchers’

What a simple solution.

Vinnie now launched into a tirade about how he never used inflatables. How people brought them back in appalling conditions. Why stretchers were the only option.

This was a very long speech. Didn’t he have a meeting to get back to?

‘We’d prefer inflatables Vinnie. But you solve our problem and we’ll be happy.’

I didn’t tell him that we’d left one of his giant tents back in Broome. I didn’t tell him our second tent was a baby hiking tent. I knew that no stretchers were ever going to fit into that tiny space, but decided not to complicate things and agreed to exchange the giant stretchers for small stretchers at the Kimberley Camping Store when we passed through Broome on the Friday.

I decided to call everyone to make sure they all understood their role in this next instalment.
Posted by little hat at 20:46 No comments: