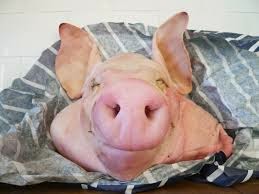 At Morningside
where we got eaten by mosquitoes every summer
where the sun filled the front room with light
and warmed the day bed through winter
my mother's domain was at the back of the house.

The kitchen was the cold room
warmed by my mother's old fashioned baking
scones for visitors
sponge cakes for birthdays
and the Sunday roast when Uncle Nat would visit.

My father cooked his favourites from time to time
kidneys sauteed in cream and a dash of whiskey
liver cooked until it had the texture of leather
tripe cooked in milk
and a pig's head in a pot.

My father was a smallgoods rep
with a van full of cured meats
sides of beef
lamb carcasses ready for the butcher's knife
and occasionally a pig's head.


I didn't feel sad for the pig
this was a pig's fate, to feed a family
he (I assumed all food animals to be boys)
looked quite at home in that aluminium pot surrounded
by bay leaves, carrots, onions, cloves, coriander seeds and pepper.

Mum was not a big fan
but supported my fathers obsession
she helped strip the head of flesh (including the tongue)
placed the mix in rectangular metal trays
and placed two heavy irons on top.

Terrines and hand-made brawn
remind me of my father and his food obsessions
they make me think he never lost his Italian roots
and his love of peasant food
though, unlike his father, he never made salami.

I wonder
perhaps the brawn connection was through his Irish mother.