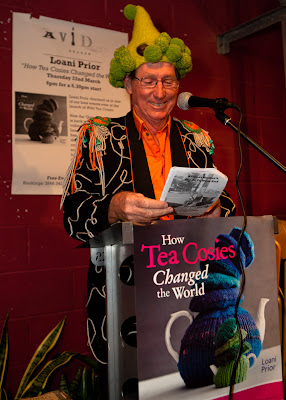 Loani had asked me to MC her book-launch. Oh god! Public speaking. A joy. And a reason to have a nervous breakdown. I had two weeks notice. I began with a self hypnotic mantra which was intended to convince myself that if I just allowed time the ideas would come. The toilet was a pretty productive place as was my regular 20 laps of the local pool.

In my mind I was very clever, not to say hilarious, as I churned through the laps; laps turned out to be better than the toilet seat. Thirty minutes meditation on the loo I realised, was not only going to cause some disruption to family habits but to bowl habits as well; I remembered my mother's words: ' get off the toilet Stephen, you'll get piles.'

On lap 68 my plan began to develop. I would tell the story of the Adelaide woman who had knitted thirty of Loani's tea cosy designs and offered them to the local coffee shop where people came just to admire the wacky creations. And order a pot of tea on the side.

I would take the piss out of the self proclaimed 'Queen of the Tea Cosies' by quoting from the comments on her blog left by her acolytes. I would pose the possibility that Loani had, in fact, created a cult, with her as the goddess. There was plenty of material. My 'piece de resistance' would be to demonstrate that not only was most men's first response to a tea cosy one of putting it on their head but I would go one better, I would wear a teapot (and tea cosy) on my head as the final joke. 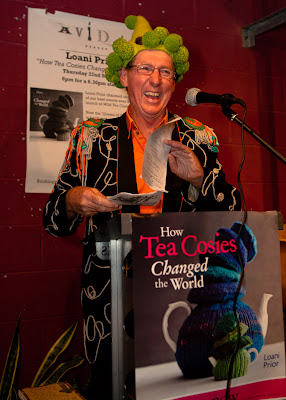 There was too much chlorine in the pool that week I suspect, because I couldn't figure out how to attach a tea pot to my head so my punchline was dead in the water, as it were.

By now it was the morning of the book launch. The table was littered with things. A couple of tea pots, some double sided tape, a roll of gaffa tape, an akubra hat and a length of cotton cloth. It was a disaster scene. I needed saving from my creative chaos. In stepped my regular saviour in these matters - Mistress A, mother, wife and costume designer, 'wear that dress up coat of yours. Add the tea cosy and it'll look great.' Where's that coat I wondered? Oh yeah. In the spare cupboard with all the other leftovers I am saving for an unknown occasion.

One set of things I've never chucked out is my costume collection from my performance days. I have the black twirly coat, a yellow and black check jacket, my original clown's hat; I even have my original striped circus bloomers from 1983. I can't bear to dump them. They have such memories, such stories to tell.

That evening at Avid Reader Bookshop, my swimming meditation paid off; my script flowed, my jokes hit the mark. Loani was brilliant.

One of my oldest friends asked: 'What show was that coat from?'. 'The Bob Club' says I. 'Remember. When every character was called Bob and the subtitle was "A Few Bob's Short of a Quid". It was a show full of acrobatics, cabaret, music and political satire, I played "Bobby Pin", a punky slapstick character obsessed with supermarket trolleys. 'Yeah. That was one of my favourites' says she. Did she remember the show? My performance? Or just the coat? No matter, it had helped a moment survive the moth eaten remnants of the past.

And so my curly coat goes back into the wardrobe for another possible occasion. It's been 27 years. In another 27 I'll be wearing it to funerals. There's a thought. I'll dictate in my will that I am to be buried in style. In my favourite coat.


For a great account of the meaning of things:
Sarah Toa over at A WineDark Sea has been moving house. She has written a great piece about the dilemna she confronted when faced with the choice of throwing or towing some of her 'icons' she discovered in the process of packing up.
Posted by little hat at 20:40 4 comments:

How Tea Cosies Changed the World 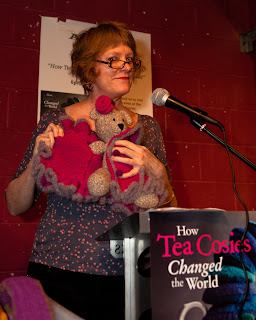 Old mate and Tea Cosy obsessive Loani Prior launched her third book of Tea Cosy creations last Thursday night. She and I have become a bit of a double act. I helped her launch her last book at Avid Reader bookshop in 2010 and she invited me to do the honours again with this years offering.

Loani has a gift for creating art from tea cosies. She has also learnt over the past 5 years that tea cosies have much more to offer than their capacity to keep tea warm. I'll admit I was confused when she first told me the title of this publication. I presumed that "How Tea Cosies Changed the World" was going to be Loani's quirky history of tea and tea cosies and their place in changing social mores.

My reference point was a book I discovered many years ago titled: "How the Irish Saved Civilisation". I was convinced that that title was ironic and that it would be a spoof, Irish style. It turned out to be the opposite, a very serious analysis of the dark ages and Ireland's role in saving many of the classic tomes which were being destroyed by barbarians. 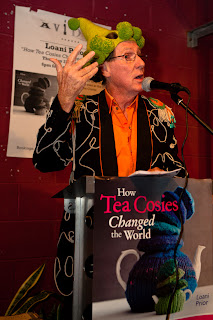 In Loani's case I was again confounded. Her Tea Cosy book is really about how tea cosies connect us to our history and to each other. Life Changing? Is that too big a claim? Well not according to a couple of people I met at the book launch. A young woman told me that she had bought Loani's first book and set out to teach herself to crochet and knit. She was struggling and so set out to find some like minded people. Twelve months later she has 100 knitting/crocheting colleagues who meet weekly at various places across the nothern suburbs of Brisbane to 'stitch and bitch' 'knit and natter' and she is now connected to a whole new world.

Not only does Loani's book contain some great knitting creations, it also has some great and touching stories about people she's met, stories they've shared with her and she's dedicated a cosy to each of these people.

It's a strange world where knitting tea cosies can verge on becoming a cult; where a Tea cosy book written by a Brisbanite can become an international phenomenon and be translated into French, Dutch and even Estonian. 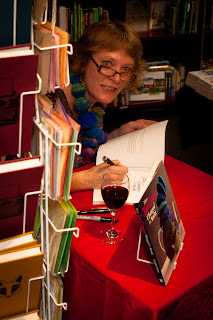 At Loani's book launch I said " I've come to understand that this phenomenon is not about tea (some of the knitters don't drink tea); it's not even about knitting; it's actually about people having their creativity liberated and how the things we love can knit us all together."

PS I misread the invitation. I thought it said 'Come as your favourite tea cosy'!
Posted by little hat at 12:54 2 comments: