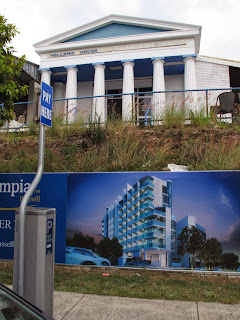 Writing walking tours of West End can be fraught with challenges. The visibible can disappear and the invisible can become visible.

In the second of the West End Walks series, completed 12 months ago, there are already two major icons which have or will disappear from the walk. They will survive, but in memory only.

In recent weeks billboards have announced that one of the strange but loved icons of local Greek culture is to be replaced by a commercial development. The original Greek Club, their kafeneio, which dates from the sixties and inspired by the design of the Parthenon will become apartments. Something unique replaced by something commonplace.

The greek community have gathered here for almost fifty years. Before that, it was the site of the first Greek Child Care Centre. The land was first purchased in the 1920s, intended as the site for a glorious new Greek Orthodox Church. That plan lapsed and the Church of St George was built at the opposite end of the Edmonstone Street block, much of which is owned by the Greek community. Amusingly the Catholic Church built a block of  apartments for retired clergy on the adjacent corner thwarting aspirations to create a complete Greek block.

On the Edmomstone Street frontage beside the Church of St George sits the relatively new Greek Club (1975) and beside that a property purchased by the Greek Club five years ago with plans for future expansion.

This is the much neglected (and now dearly departed) heritage listed Belvedere Mansion.

The development of the Hellenic House site has been given the name Olympia.
Posted by little hat at 19:19 No comments: